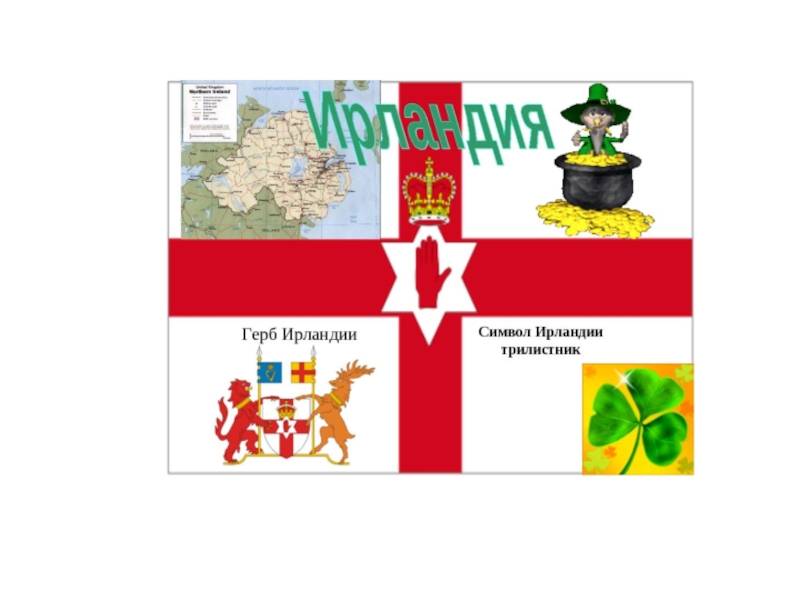 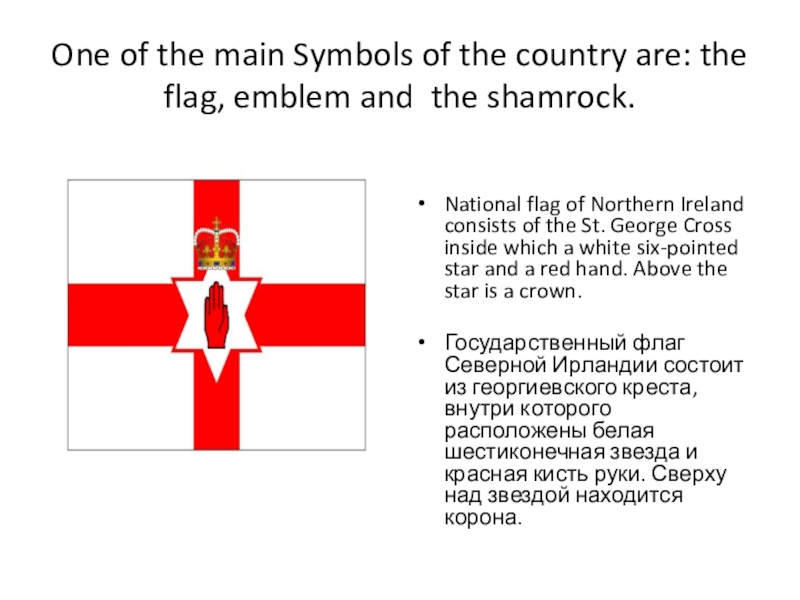 One of the main Symbols of the country are: the flag, emblem and the shamrock.

National flag of Northern Ireland consists of the St. George Cross inside which a white six-pointed star and a red hand. Above the star is a crown. 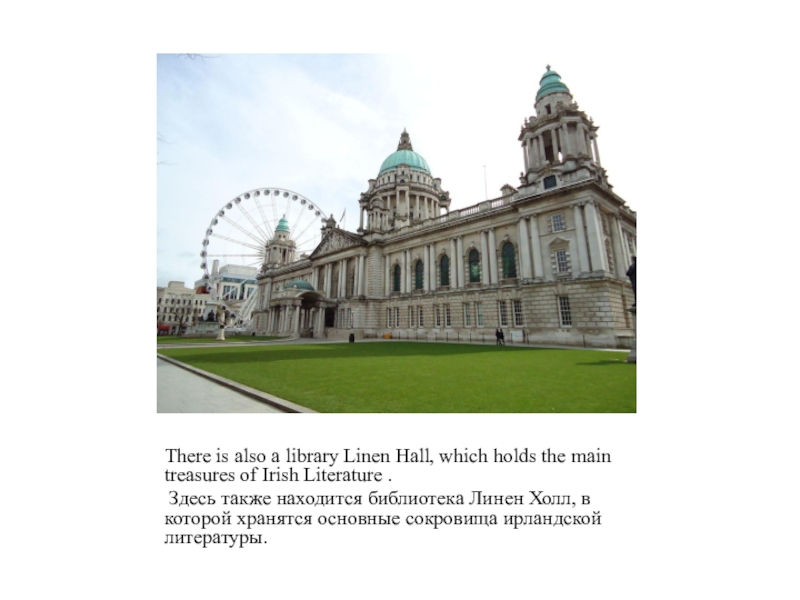 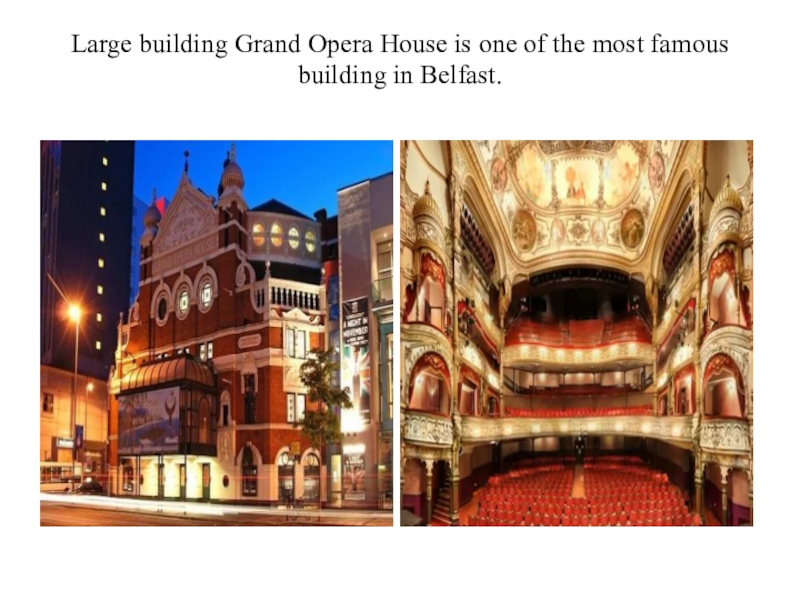 Large building Grand Opera House is one of the most famous building in Belfast. 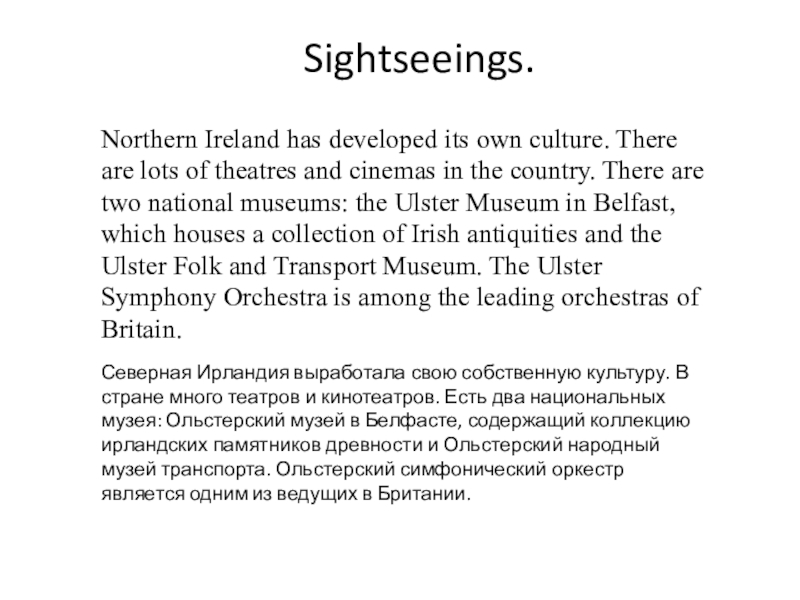 Northern Ireland has developed its own culture. There are lots of theatres and cinemas in the country. There are two national museums: the Ulster Museum in Belfast, which houses a collection of Irish antiquities and the Ulster Folk and Transport Museum. The Ulster Symphony Orchestra is among the leading orchestras of Britain.

Belfast Castle Antrim Road, Belfast was built in the 1870s. Castle is located on Cave Hill and dominates the bay of Belfast. Here you can visit the beautiful gardens, restaurants, antique shops and Local History Centre, the exhibition which tells the story of the castle and its surroundings. The area of about 40,000 basalt columns formed by an ancient volcanic eruption. Located on the North East Northern Ireland 3 km to the North from the town of Bushmills. Most of the columns are hexagonal, some four, five, seven, and eight corners. The highest column height of about 12 m. 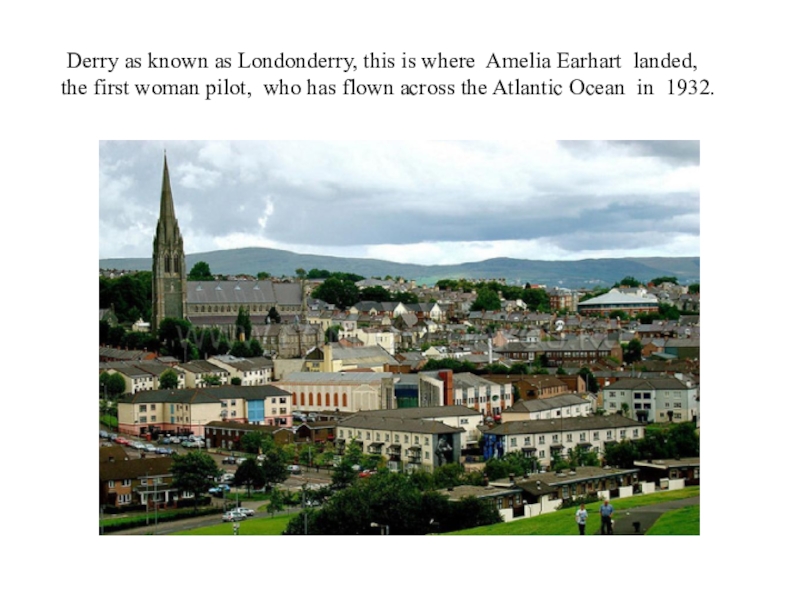 Derry as known as Londonderry, this is where Amelia Earhart landed, the first woman pilot, who has flown across the Atlantic Ocean in  1932. 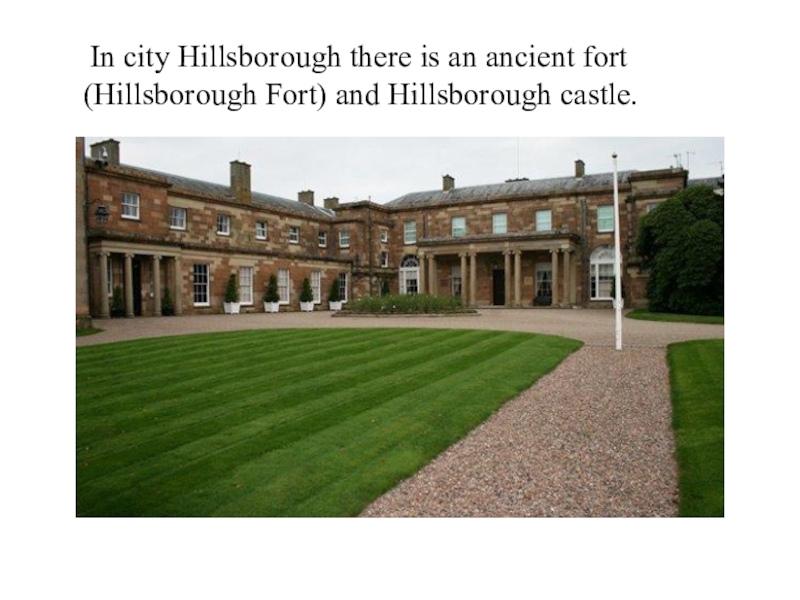 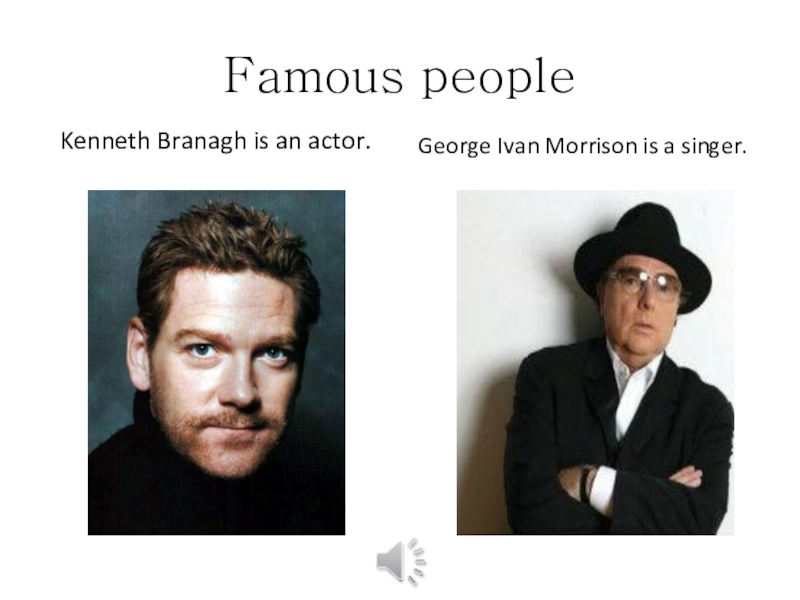 Kenneth Branagh is an actor.

George Ivan Morrison is a singer. 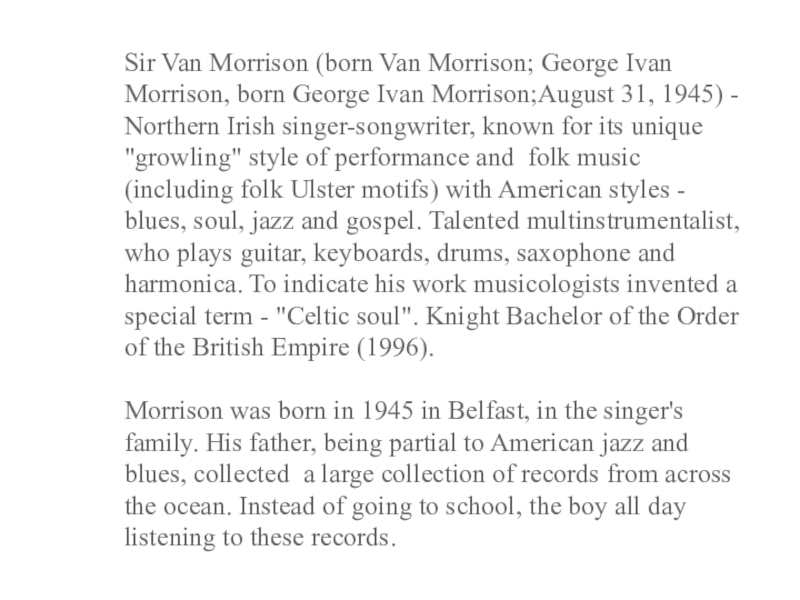 Morrison was born in 1945 in Belfast, in the singer's family. His father, being partial to American jazz and blues, collected a large collection of records from across the ocean. Instead of going to school, the boy all day listening to these records.

The most famous food there are: 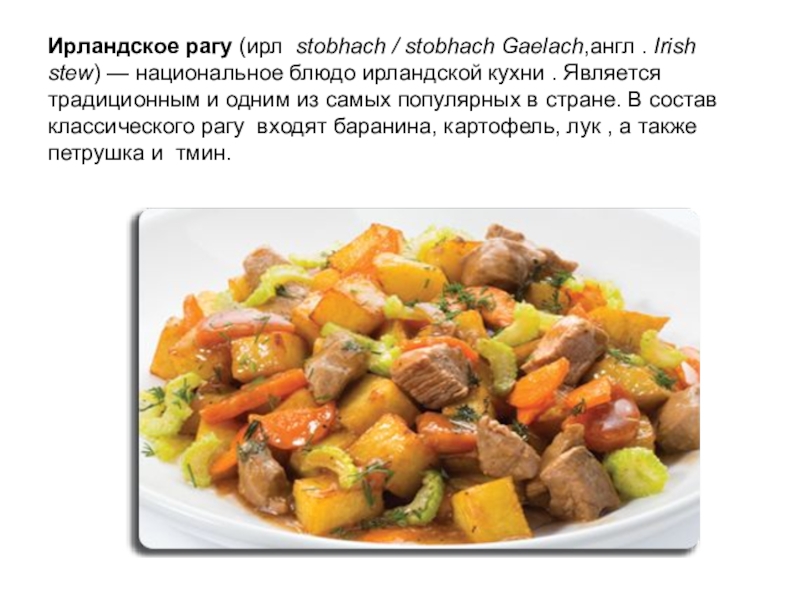 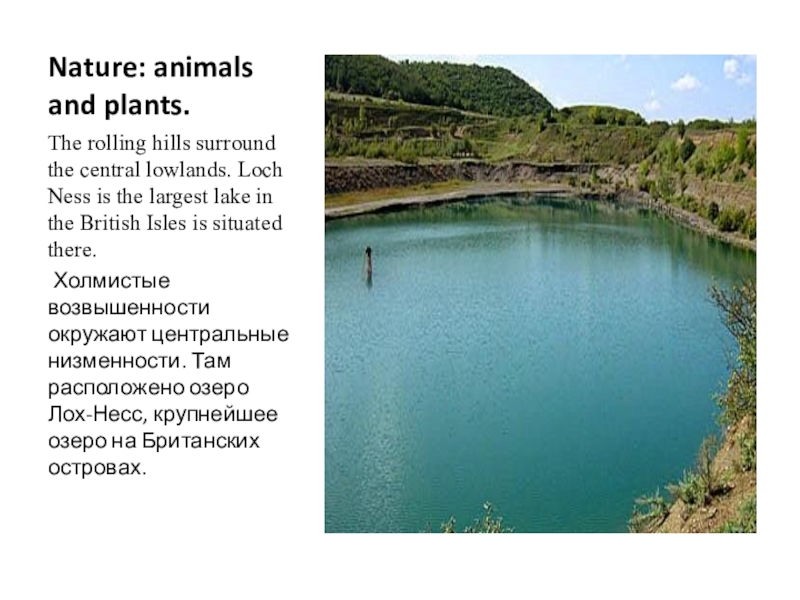 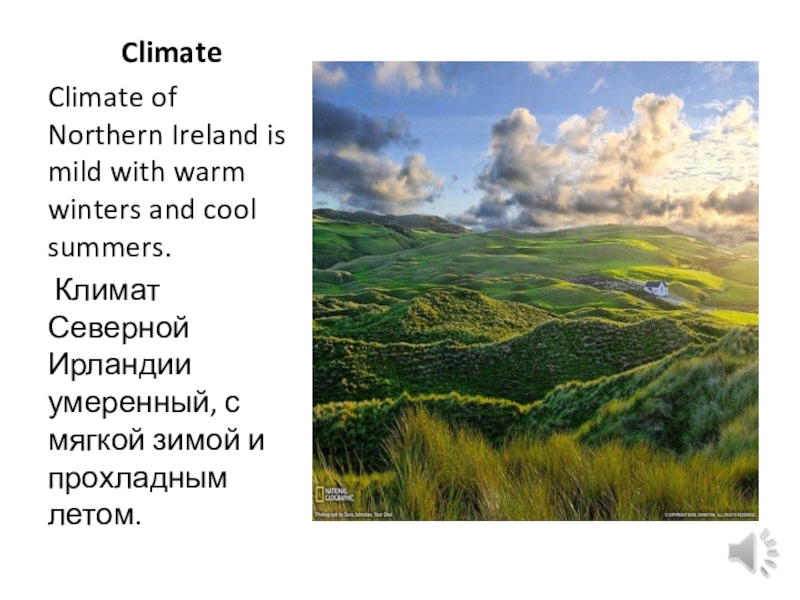 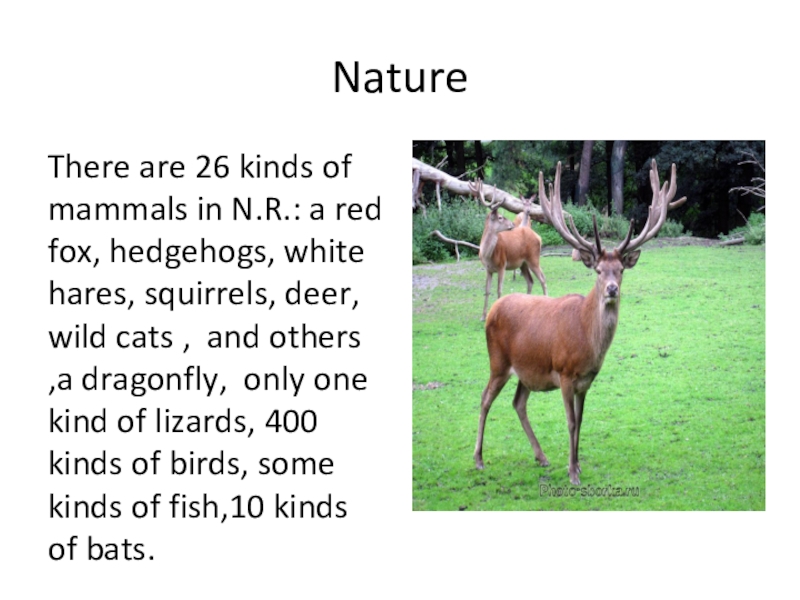 There are 26 kinds of mammals in N.R.: a red fox, hedgehogs, white hares, squirrels, deer, wild cats , and others ,a dragonfly, only one kind of lizards, 400 kinds of birds, some kinds of fish,10 kinds of bats. 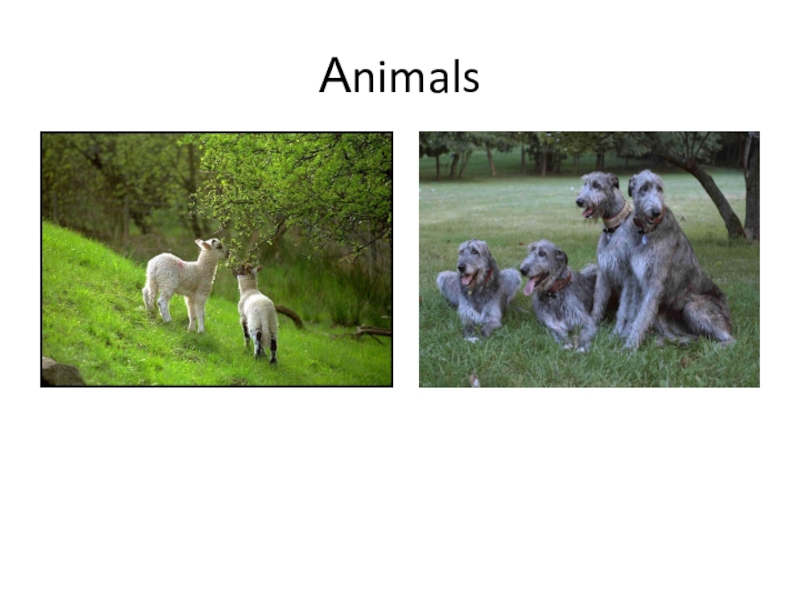 Women wear short bright dress decorated with colorful embroidery. Men have two equal clothing for dancing. It may be just a suit, and always with a tie in the color of their dance school, for example, black and green. In a more specific embodiment is a combination of jacket, shirt and tie and out from under the jacket a skirt. On this skirt there are not any patterns. Both men and women can wear the vest over dresses or shirts. The costumes of the dancers, usually decorated in green, red and saffron colours. Suits dancers are less bright. Irish – Celtic of the modern representatives of the group recently adopted the wearing of the kilt. 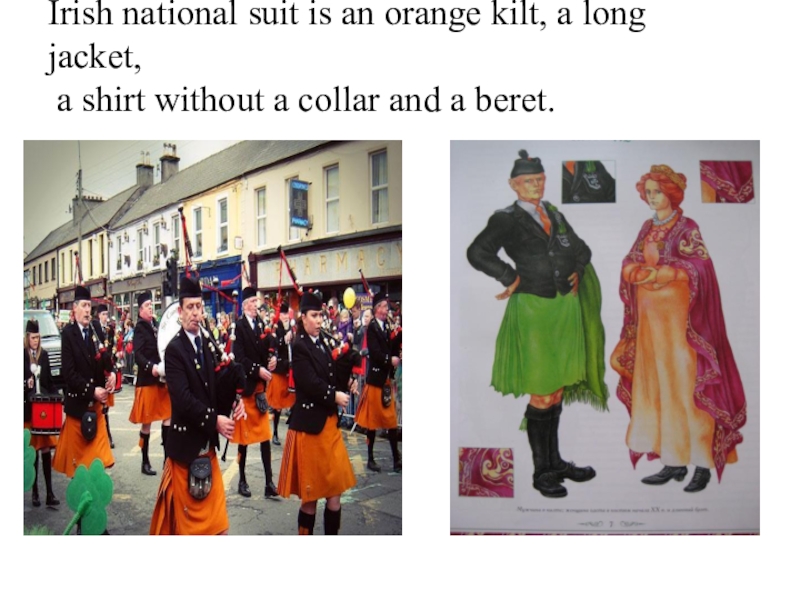 Irish national suit is an orange kilt, a long jacket, a shirt without a collar and a beret. 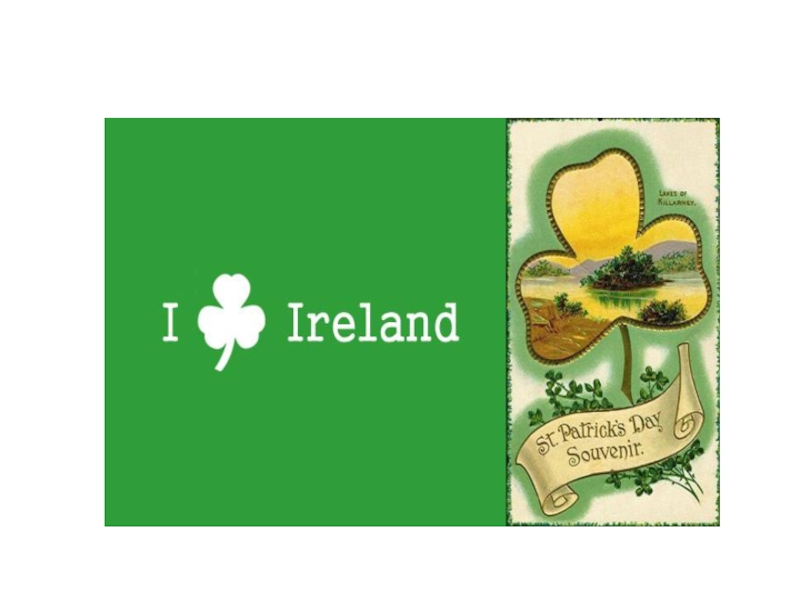 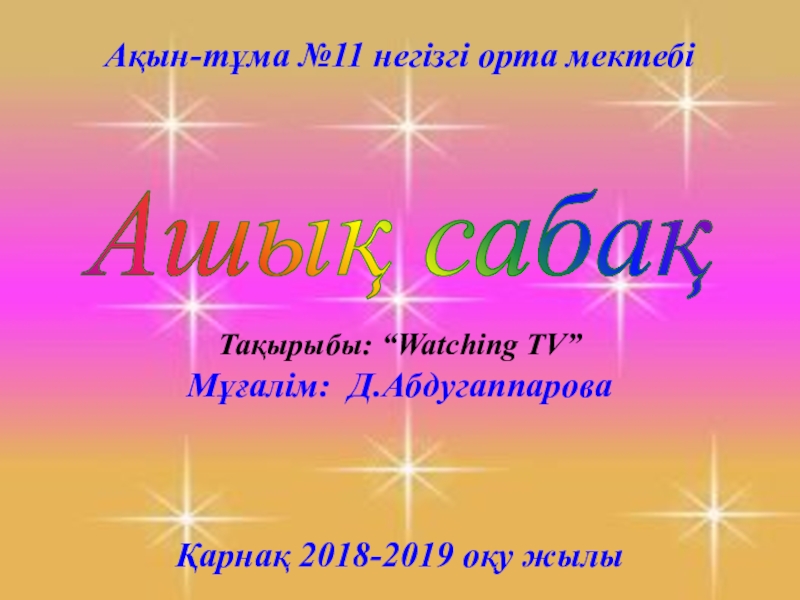 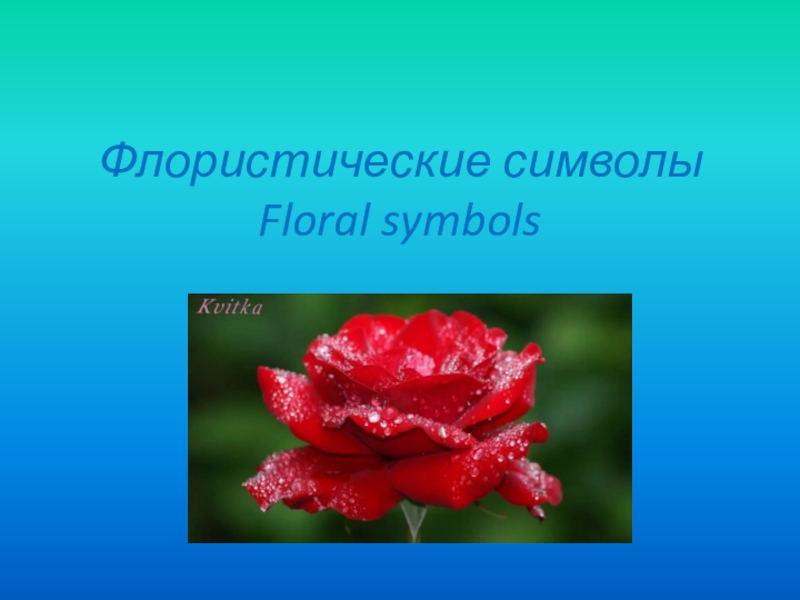 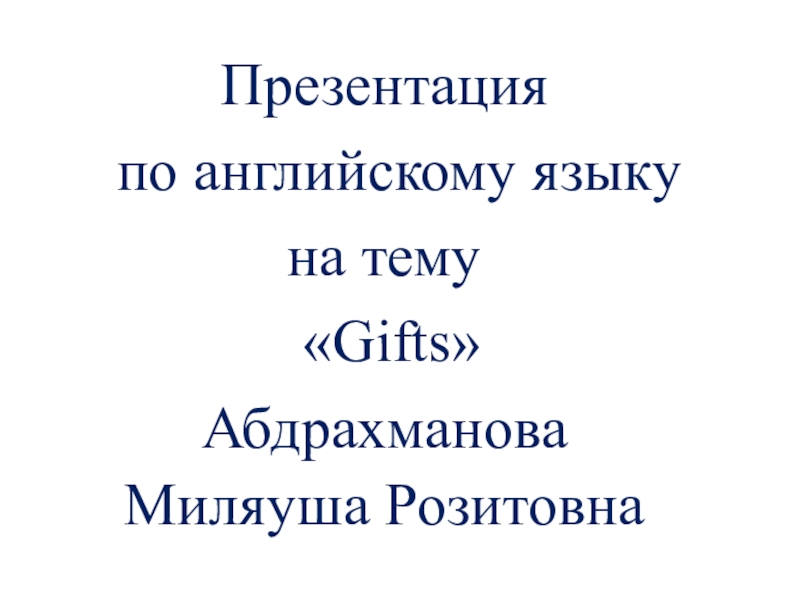 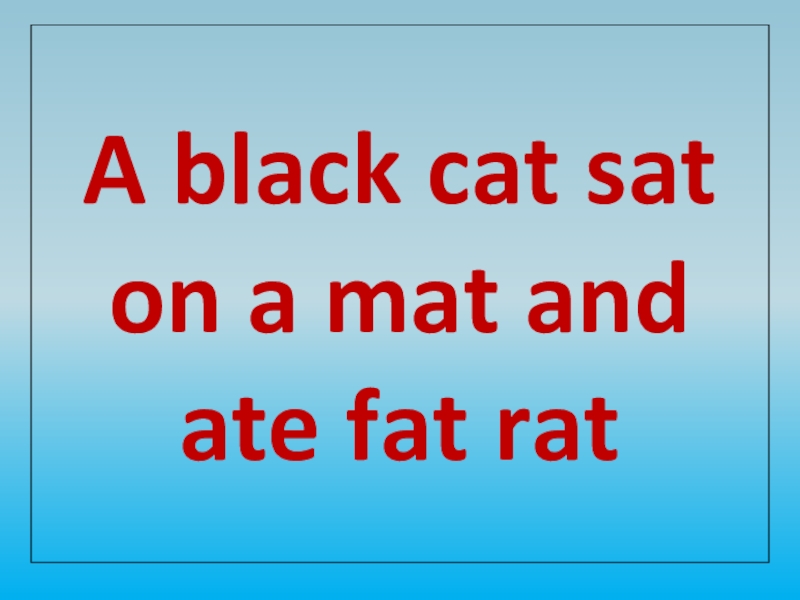 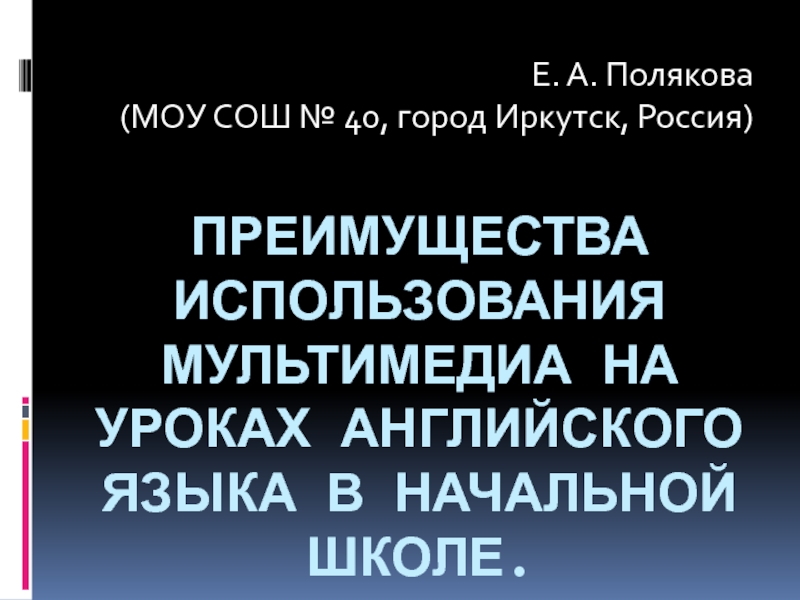