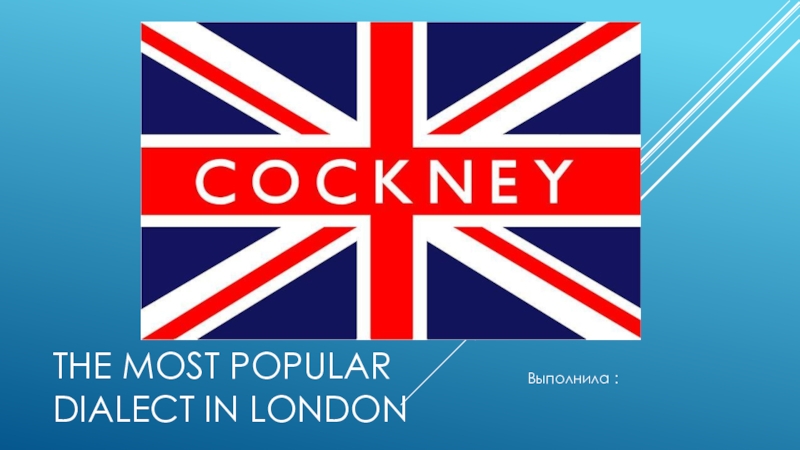 The most popular dialect in London 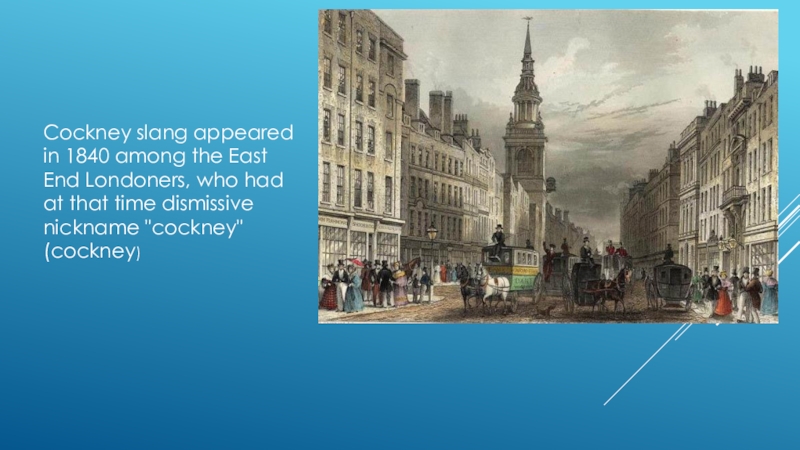 Cockney slang appeared in 1840 among the East End Londoners, who had at that time dismissive nickname "cockney" (cockney) 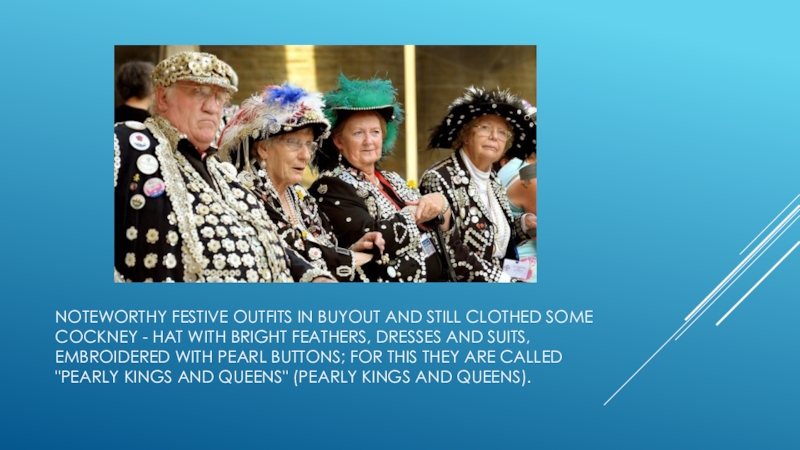 Noteworthy festive outfits in buyout and still clothed some Cockney - hat with bright feathers, dresses and suits, embroidered with pearl buttons; for this they are called "pearly kings and queens" (Pearly Kings and Queens). 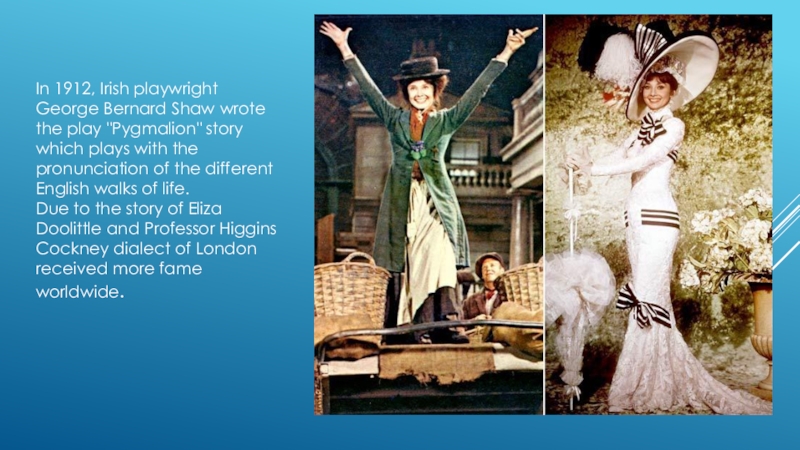 In 1912, Irish playwright George Bernard Shaw wrote the play "Pygmalion" story which plays with the pronunciation of the different English walks of life.
Due to the story of Eliza Doolittle and Professor Higgins Cockney dialect of London received more fame worldwide. 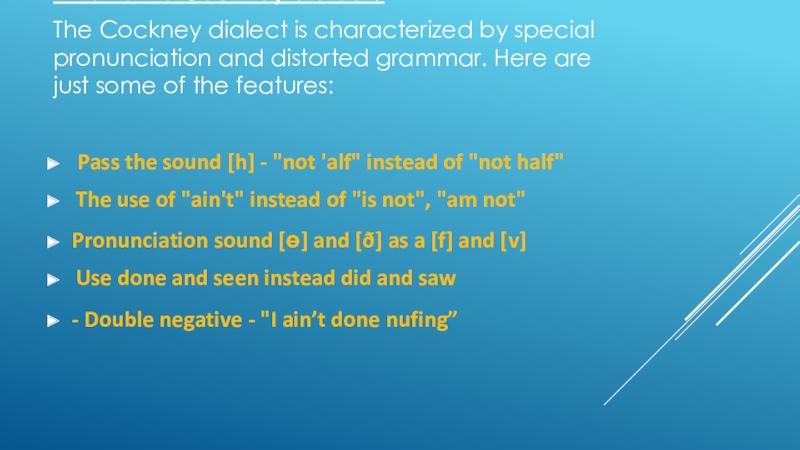 Apples and pears (Яблоки и груши) = Stairs (лестница) Пример:
I’m just going down the apples to get a cup of tea from the kitchen. 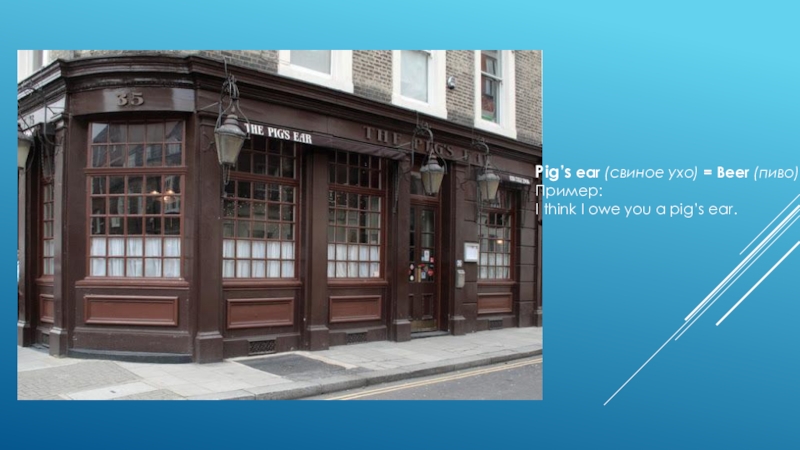 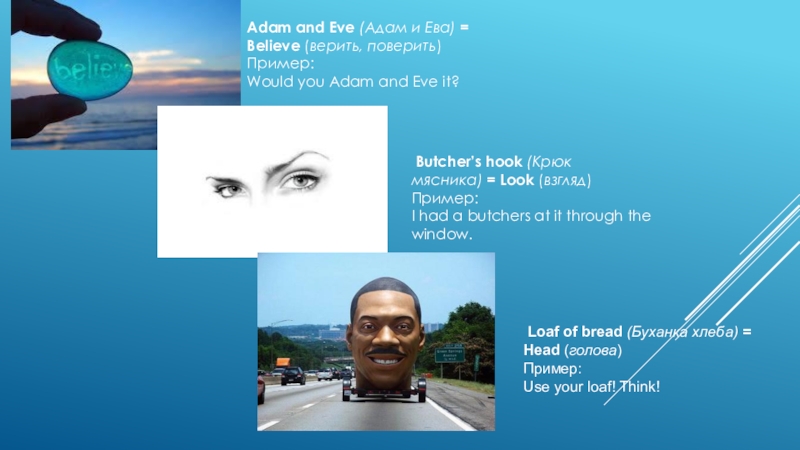 Adam and Eve (Адам и Ева) = Believe (верить, поверить)
Пример:
Would you Adam and Eve it?

Butcher’s hook (Крюк мясника) = Look (взгляд)
Пример:
I had a butchers at it through the window. 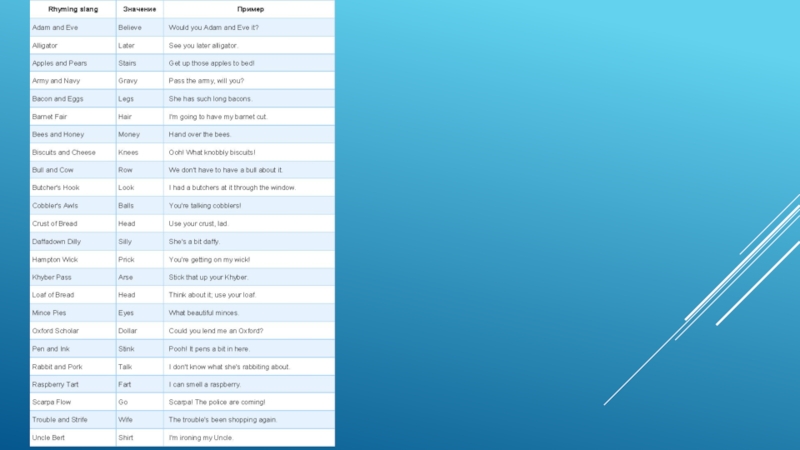 There are some pictures helping you to remember cockney phrases 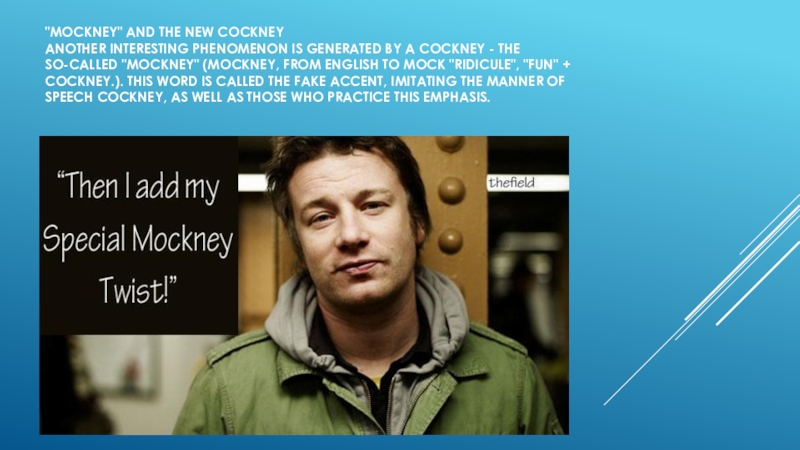 "Mockney" and the new cockney Another interesting phenomenon is generated by a cockney - the so-called "mockney" (Mockney, from English to mock "ridicule", "fun" + cockney.). This word is called the fake accent, imitating the manner of speech Cockney, as well as those who practice this emphasis. 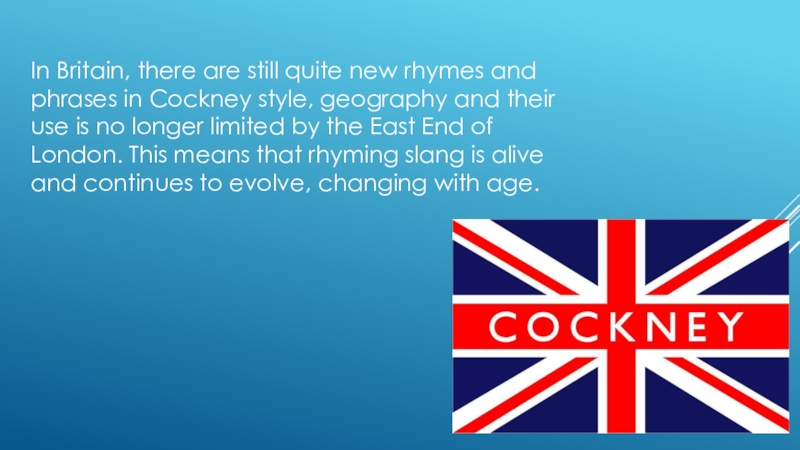 In Britain, there are still quite new rhymes and phrases in Cockney style, geography and their use is no longer limited by the East End of London. This means that rhyming slang is alive and continues to evolve, changing with age. 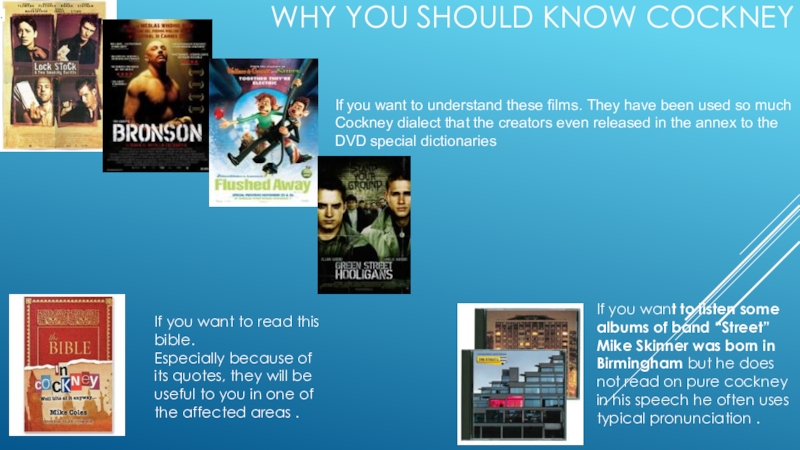 Why you should know cockney

If you want to understand these films. They have been used so much Cockney dialect that the creators even released in the annex to the DVD special dictionaries

If you want to read this bible. Especially because of its quotes, they will be useful to you in one of the affected areas .

If you want to listen some albums of band “Street” Mike Skinner was born in Birmingham but he does not read on pure cockney in his speech he often uses typical pronunciation .

Thanks for your attention 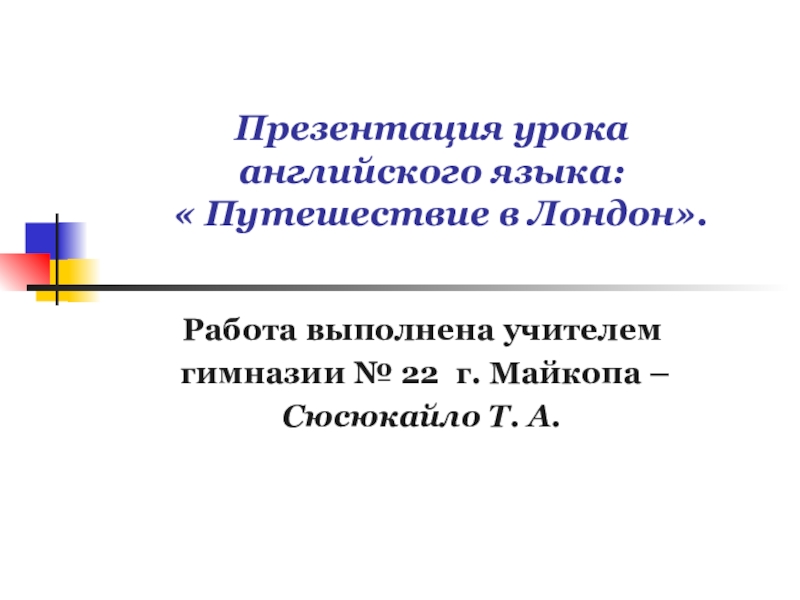 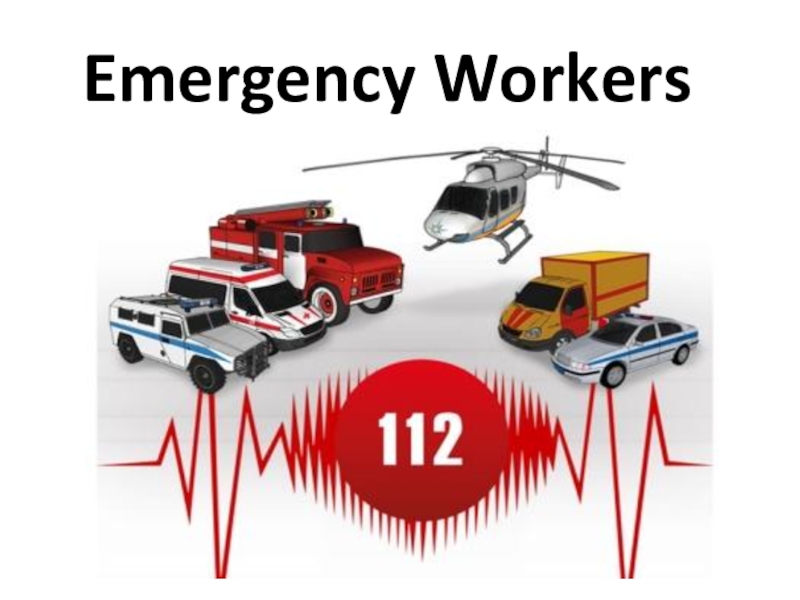 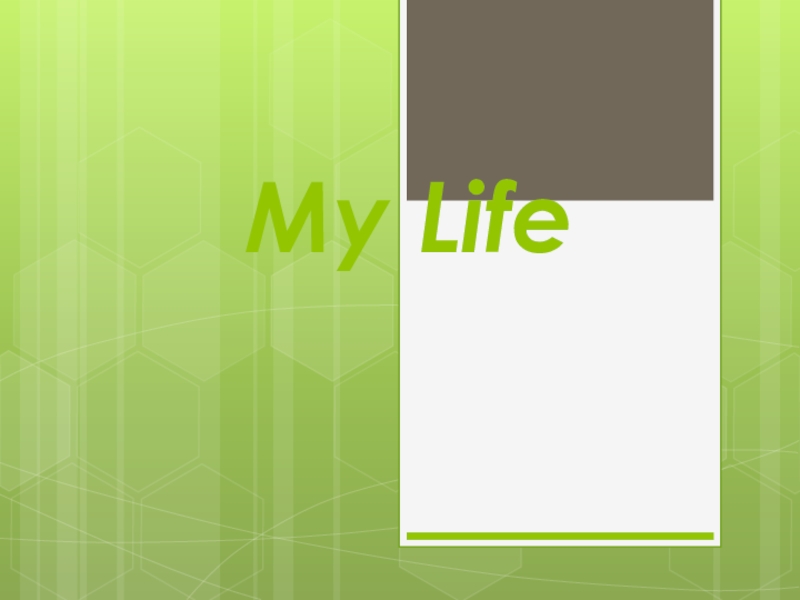 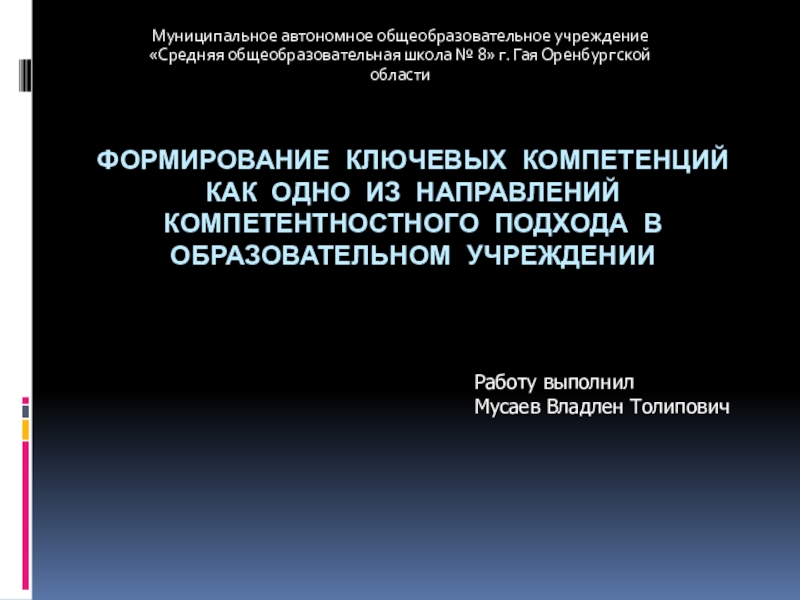