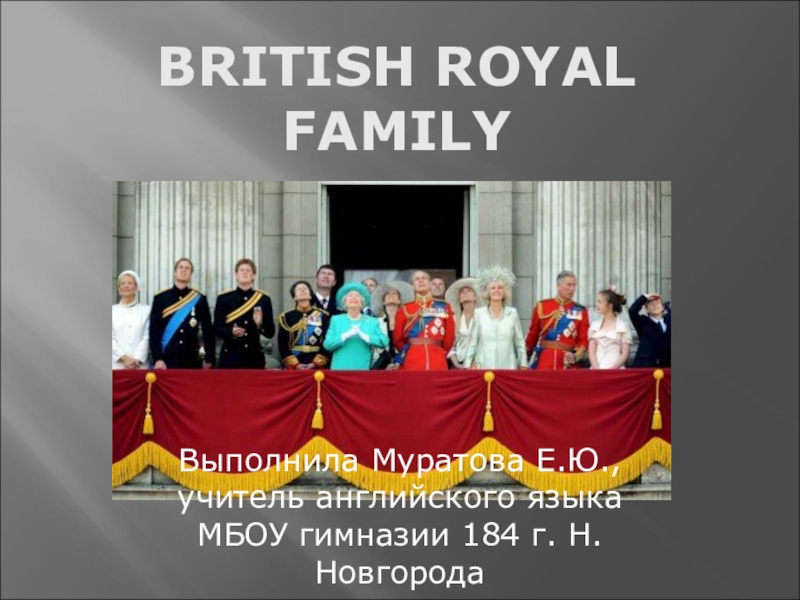 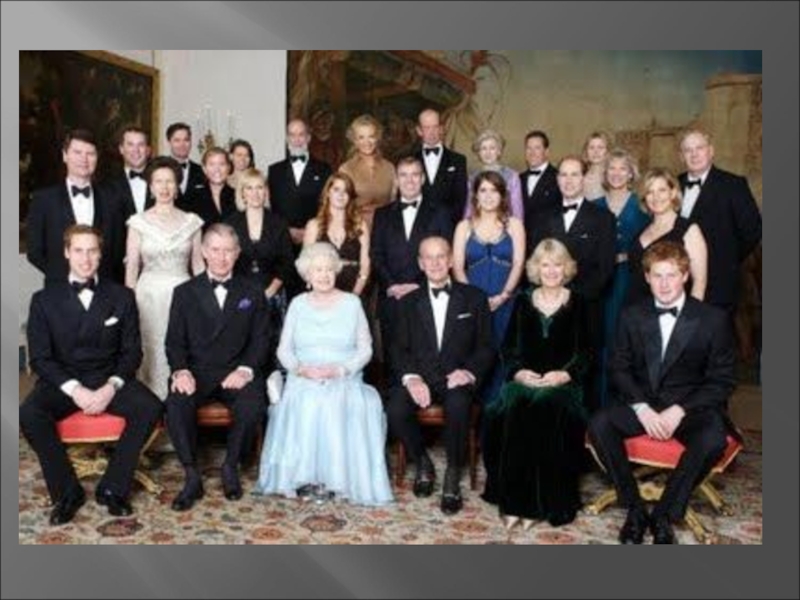 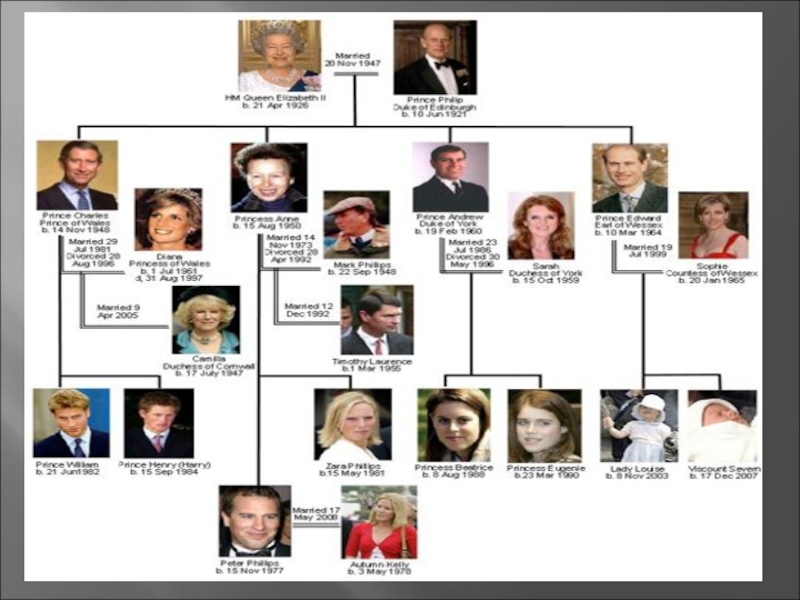 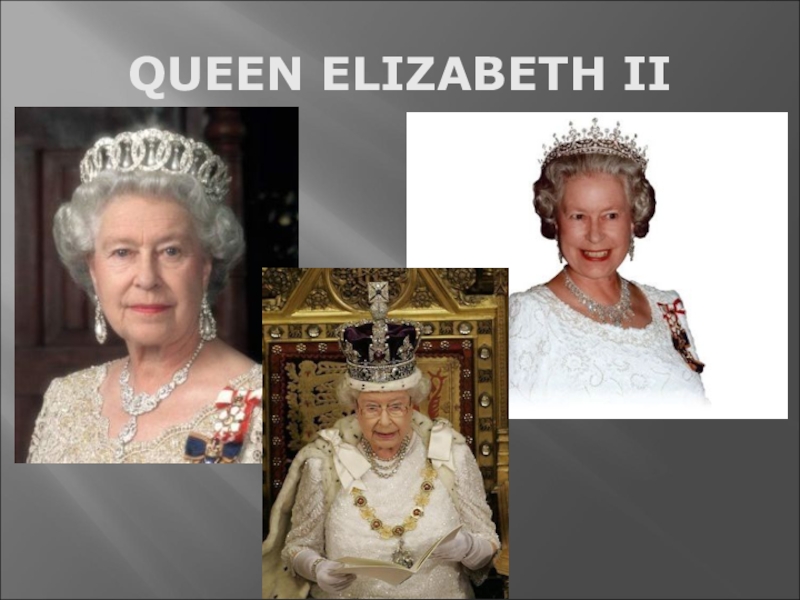 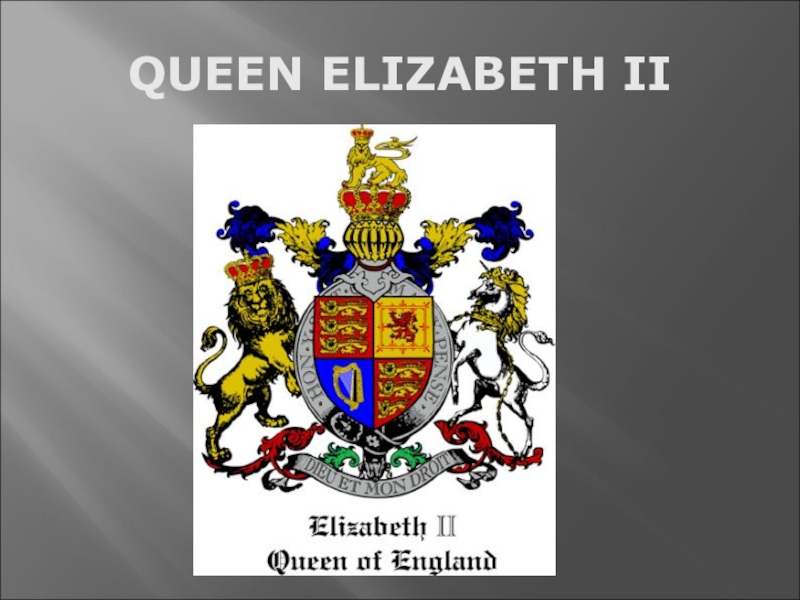 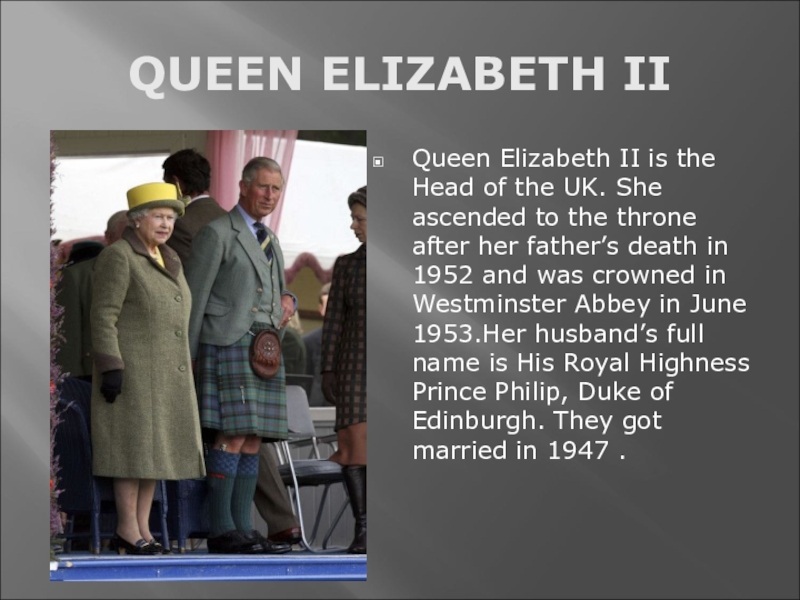 Queen Elizabeth II is the Head of the UK. She ascended to the throne after her father’s death in 1952 and was crowned in Westminster Abbey in June 1953.Her husband’s full name is His Royal Highness Prince Philip, Duke of Edinburgh. They got married in 1947 . 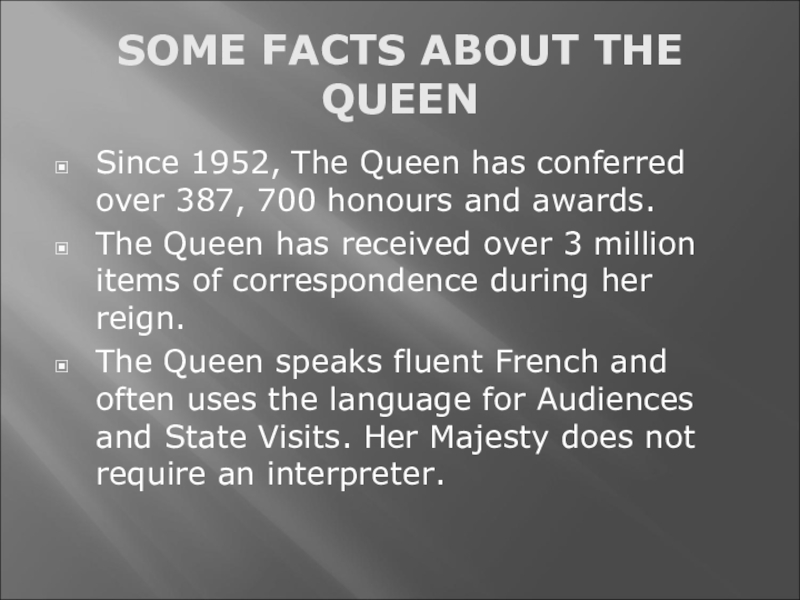 SOME FACTS ABOUT THE QUEEN

Since 1952, The Queen has conferred over 387, 700 honours and awards.
The Queen has received over 3 million items of correspondence during her reign.
The Queen speaks fluent French and often uses the language for Audiences and State Visits. Her Majesty does not require an interpreter. 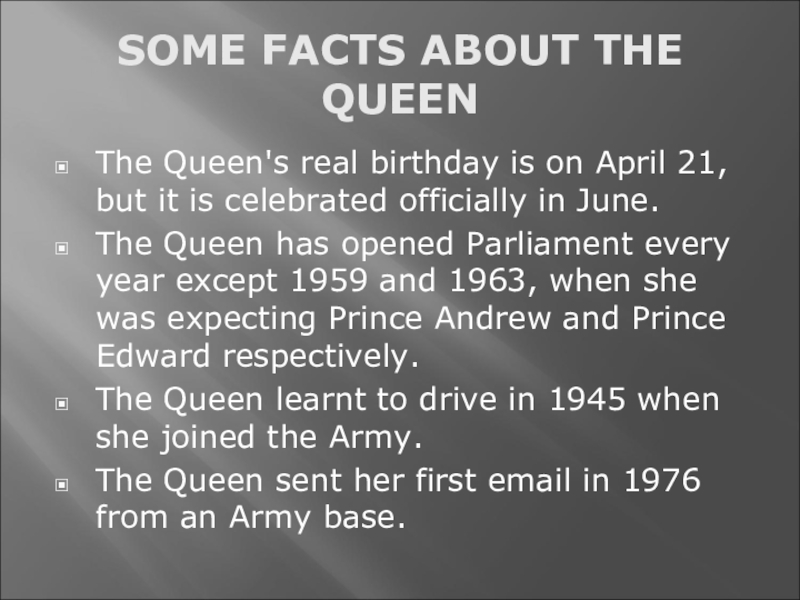 SOME FACTS ABOUT THE QUEEN

The Queen's real birthday is on April 21, but it is celebrated officially in June.
The Queen has opened Parliament every year except 1959 and 1963, when she was expecting Prince Andrew and Prince Edward respectively.
The Queen learnt to drive in 1945 when she joined the Army.
The Queen sent her first email in 1976 from an Army base. 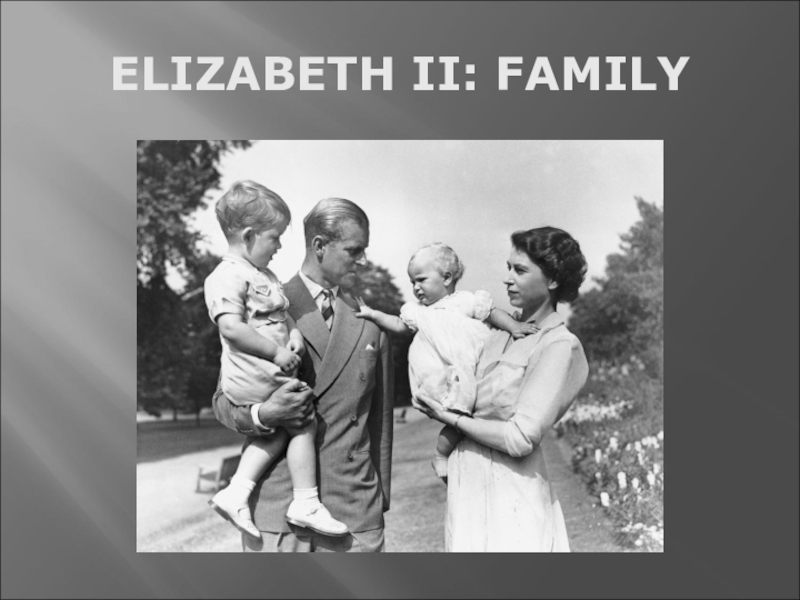 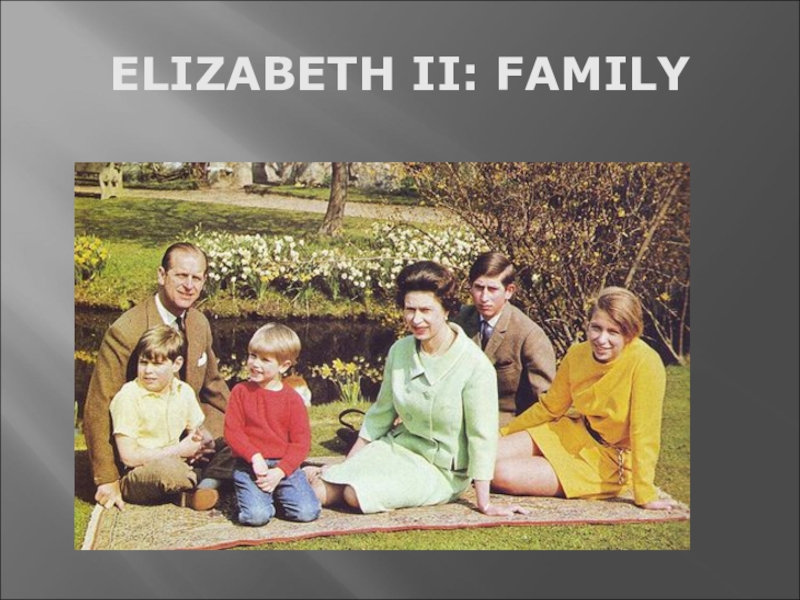 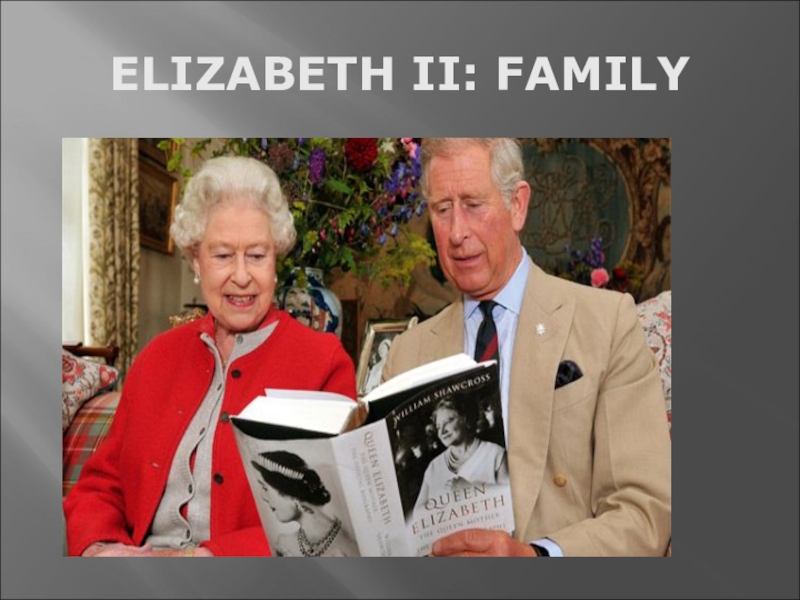 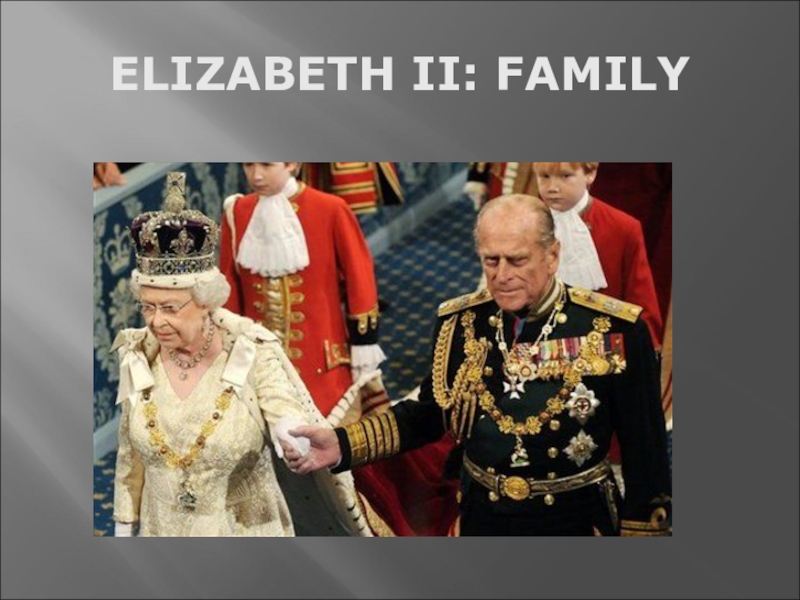 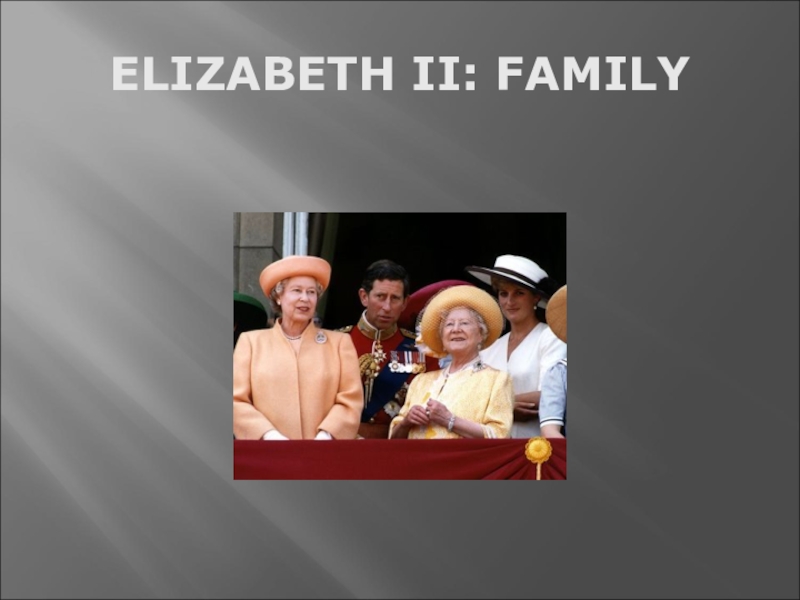 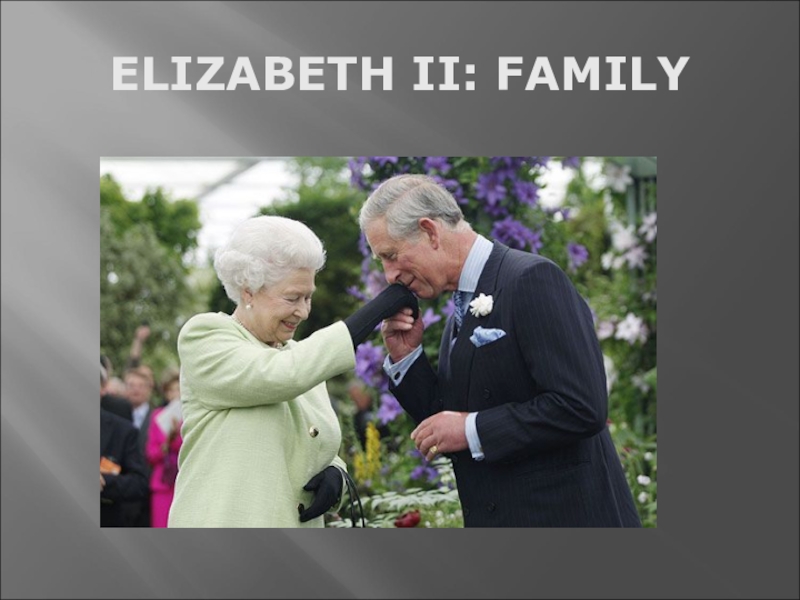 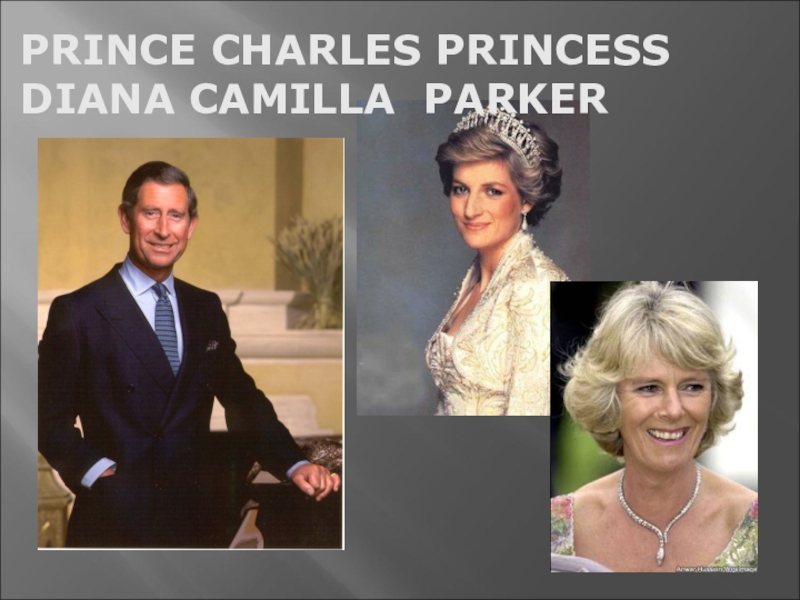 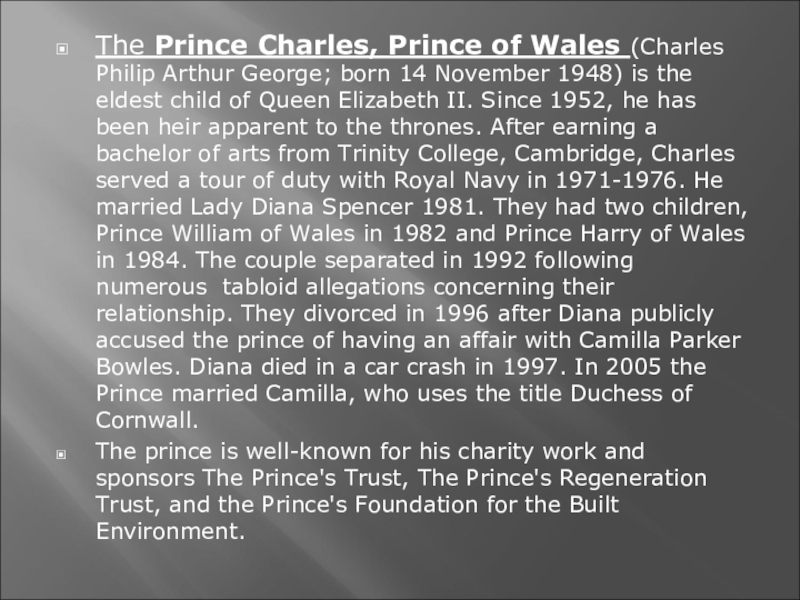 The Prince Charles, Prince of Wales (Charles Philip Arthur George; born 14 November 1948) is the eldest child of Queen Elizabeth II. Since 1952, he has been heir apparent to the thrones. After earning a bachelor of arts from Trinity College, Cambridge, Charles served a tour of duty with Royal Navy in 1971-1976. He married Lady Diana Spencer 1981. They had two children, Prince William of Wales in 1982 and Prince Harry of Wales in 1984. The couple separated in 1992 following numerous tabloid allegations concerning their relationship. They divorced in 1996 after Diana publicly accused the prince of having an affair with Camilla Parker Bowles. Diana died in a car crash in 1997. In 2005 the Prince married Camilla, who uses the title Duchess of Cornwall.
The prince is well-known for his charity work and sponsors The Prince's Trust, The Prince's Regeneration Trust, and the Prince's Foundation for the Built Environment. 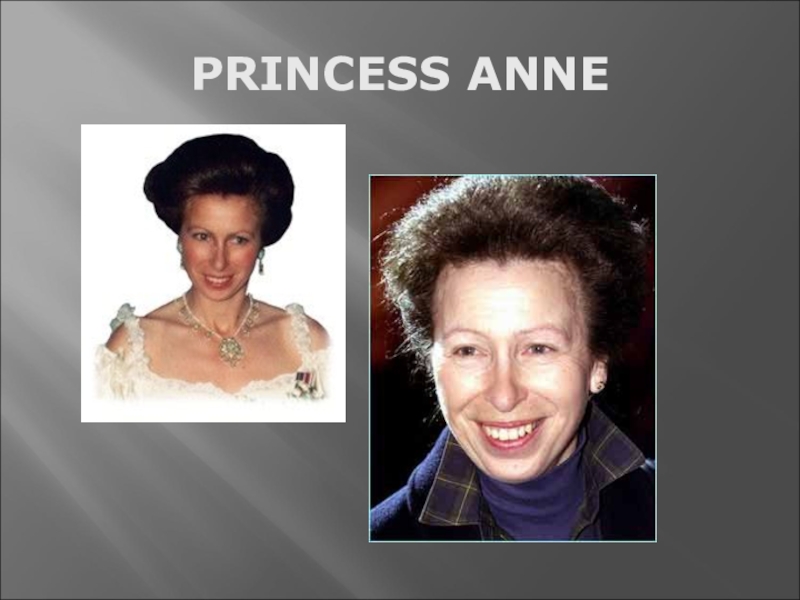 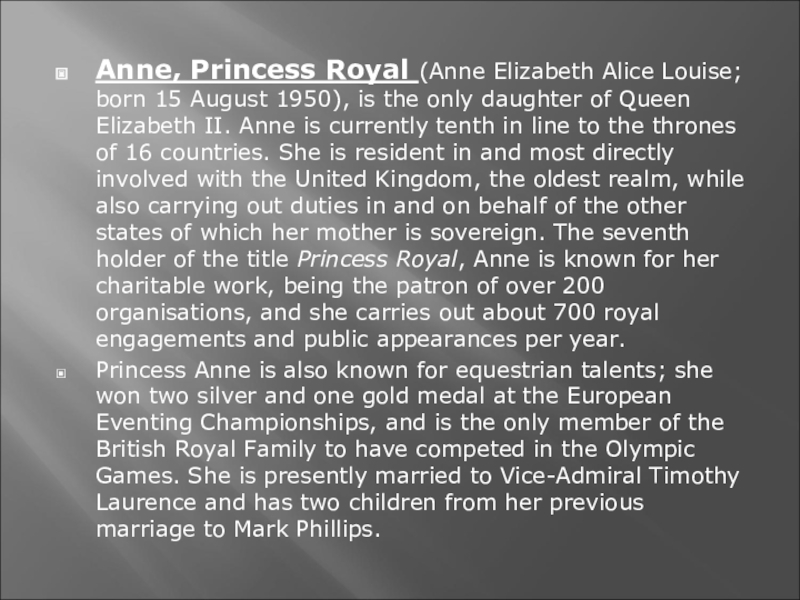 Anne, Princess Royal (Anne Elizabeth Alice Louise; born 15 August 1950), is the only daughter of Queen Elizabeth II. Anne is currently tenth in line to the thrones of 16 countries. She is resident in and most directly involved with the United Kingdom, the oldest realm, while also carrying out duties in and on behalf of the other states of which her mother is sovereign. The seventh holder of the title Princess Royal, Anne is known for her charitable work, being the patron of over 200 organisations, and she carries out about 700 royal engagements and public appearances per year.
Princess Anne is also known for equestrian talents; she won two silver and one gold medal at the European Eventing Championships, and is the only member of the British Royal Family to have competed in the Olympic Games. She is presently married to Vice-Admiral Timothy Laurence and has two children from her previous marriage to Mark Phillips. 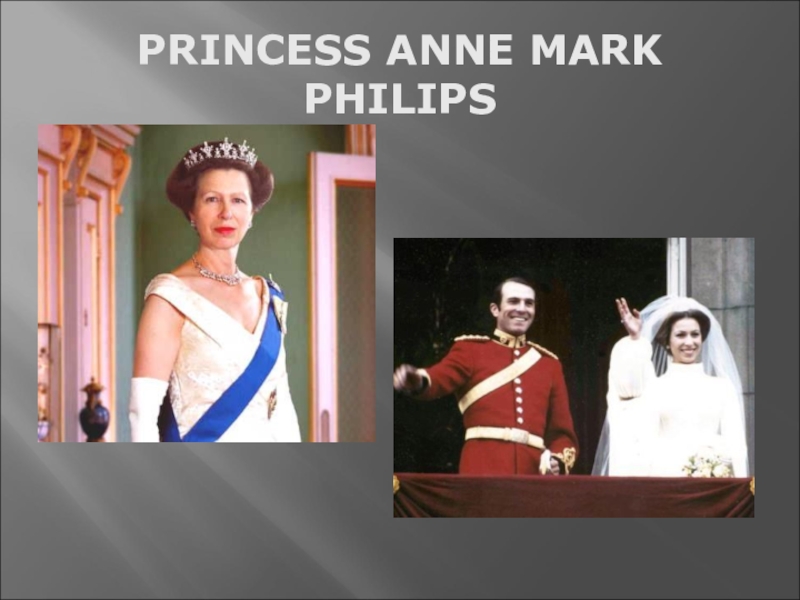 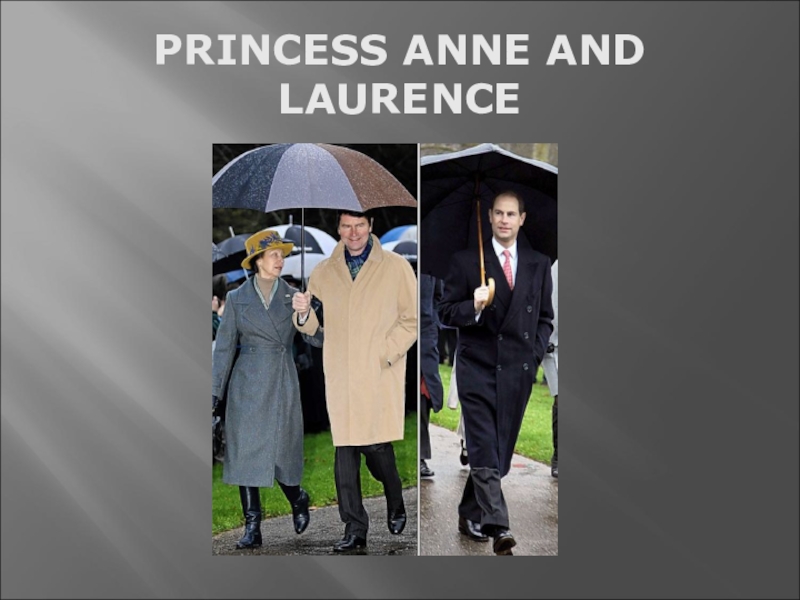 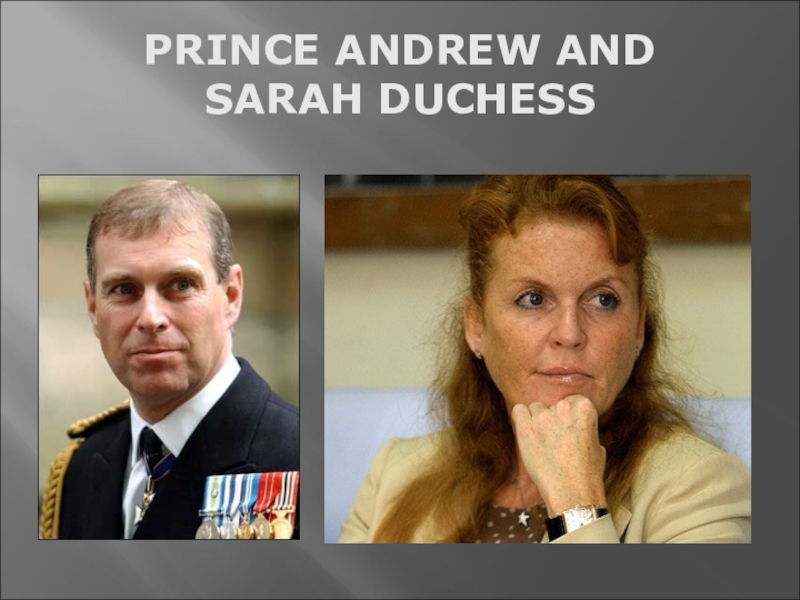 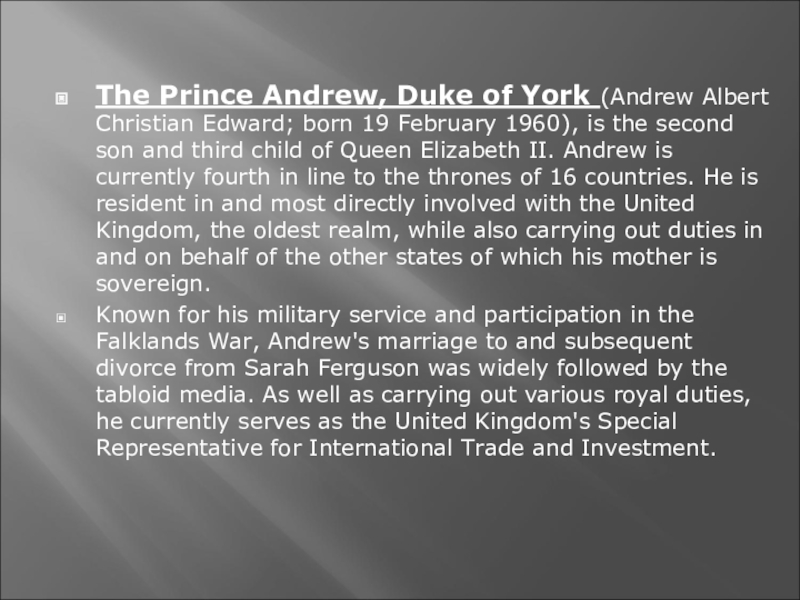 The Prince Andrew, Duke of York (Andrew Albert Christian Edward; born 19 February 1960), is the second son and third child of Queen Elizabeth II. Andrew is currently fourth in line to the thrones of 16 countries. He is resident in and most directly involved with the United Kingdom, the oldest realm, while also carrying out duties in and on behalf of the other states of which his mother is sovereign.
Known for his military service and participation in the Falklands War, Andrew's marriage to and subsequent divorce from Sarah Ferguson was widely followed by the tabloid media. As well as carrying out various royal duties, he currently serves as the United Kingdom's Special Representative for International Trade and Investment. 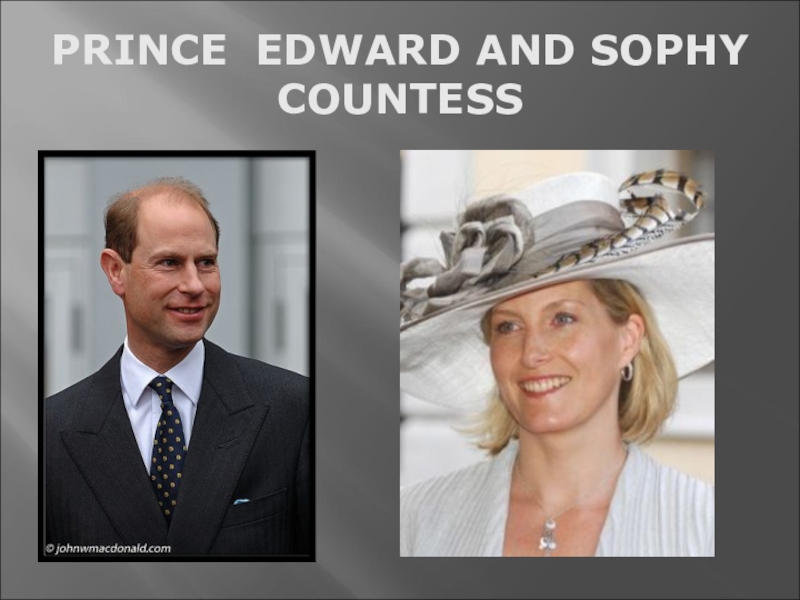 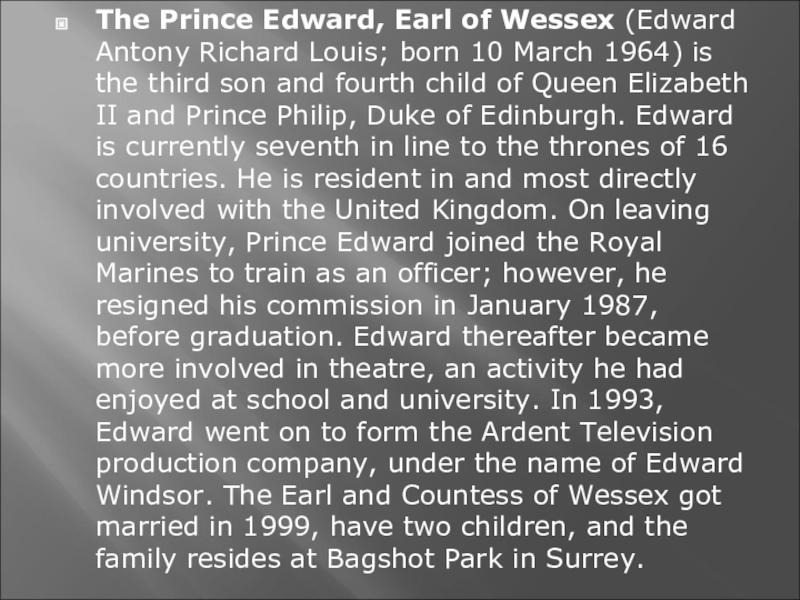 The Prince Edward, Earl of Wessex (Edward Antony Richard Louis; born 10 March 1964) is the third son and fourth child of Queen Elizabeth II and Prince Philip, Duke of Edinburgh. Edward is currently seventh in line to the thrones of 16 countries. He is resident in and most directly involved with the United Kingdom. On leaving university, Prince Edward joined the Royal Marines to train as an officer; however, he resigned his commission in January 1987, before graduation. Edward thereafter became more involved in theatre, an activity he had enjoyed at school and university. In 1993, Edward went on to form the Ardent Television production company, under the name of Edward Windsor. The Earl and Countess of Wessex got married in 1999, have two children, and the family resides at Bagshot Park in Surrey. 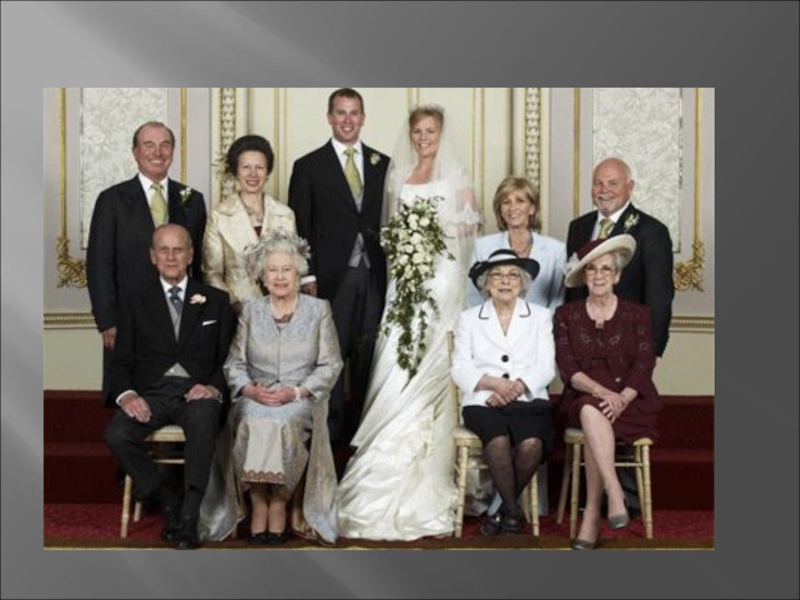 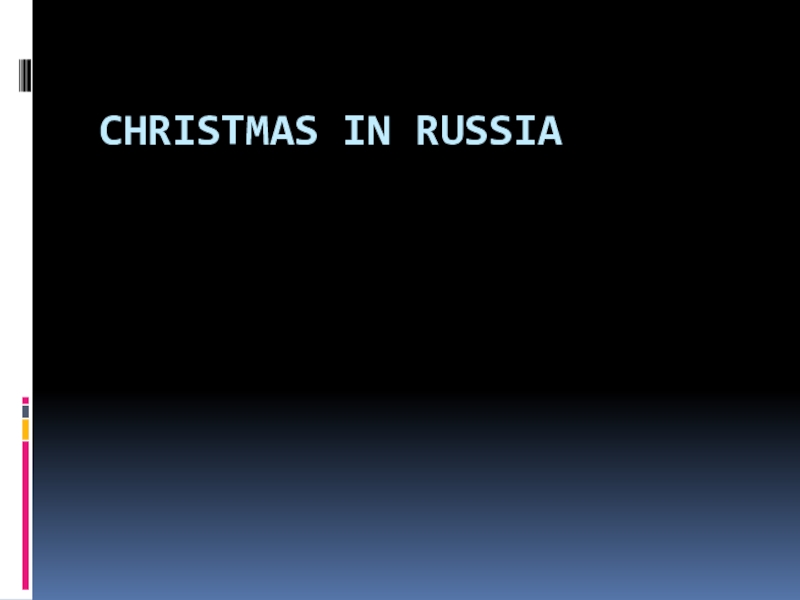 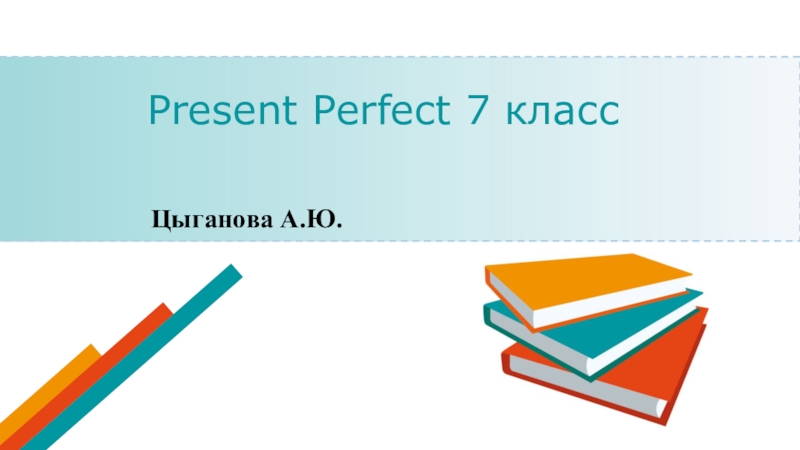 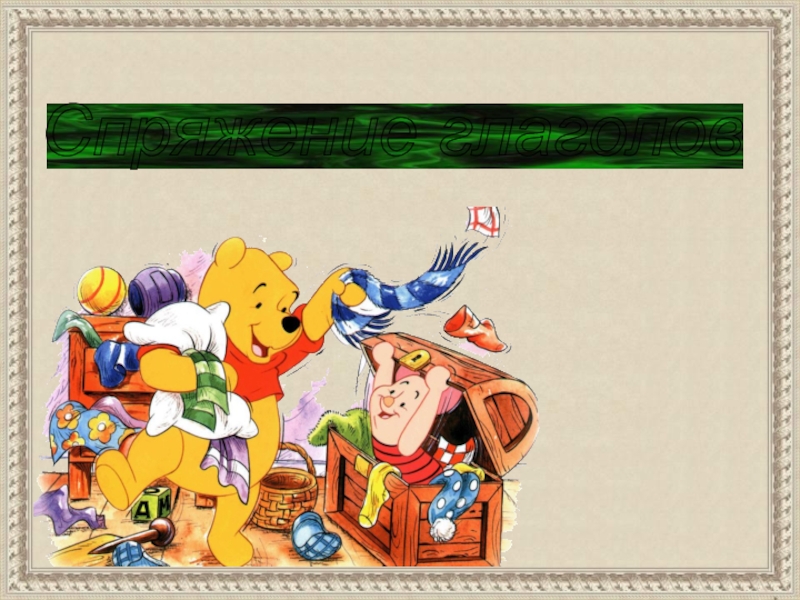 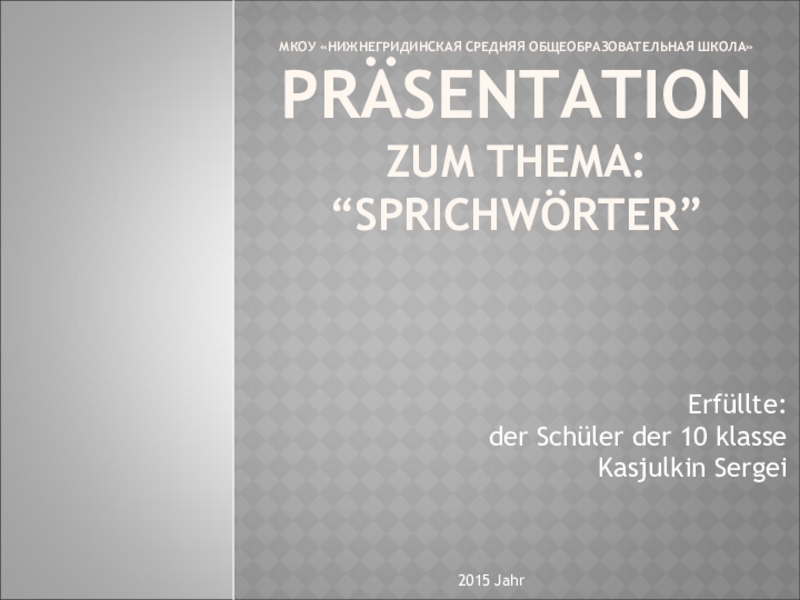 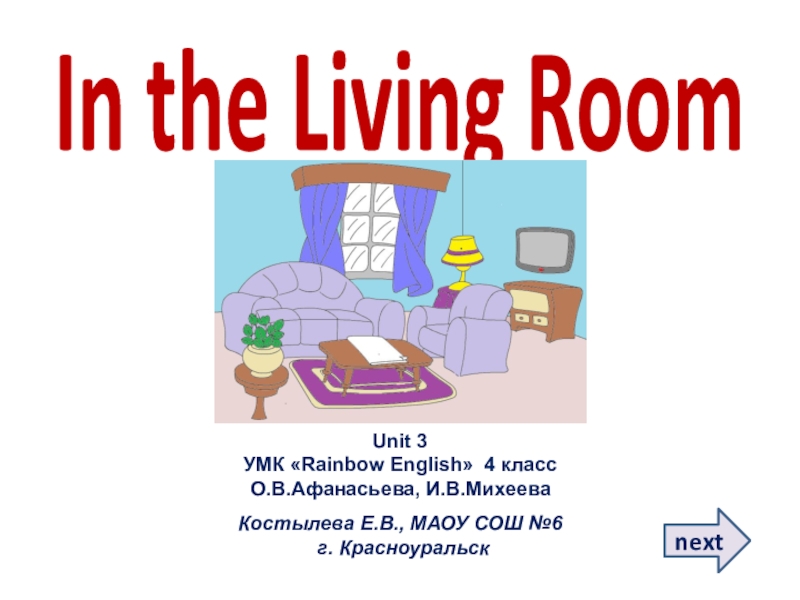