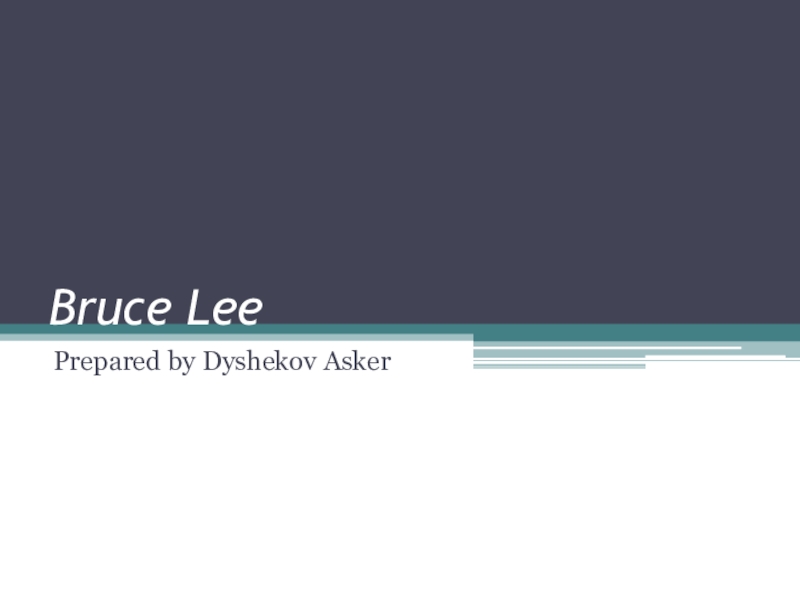 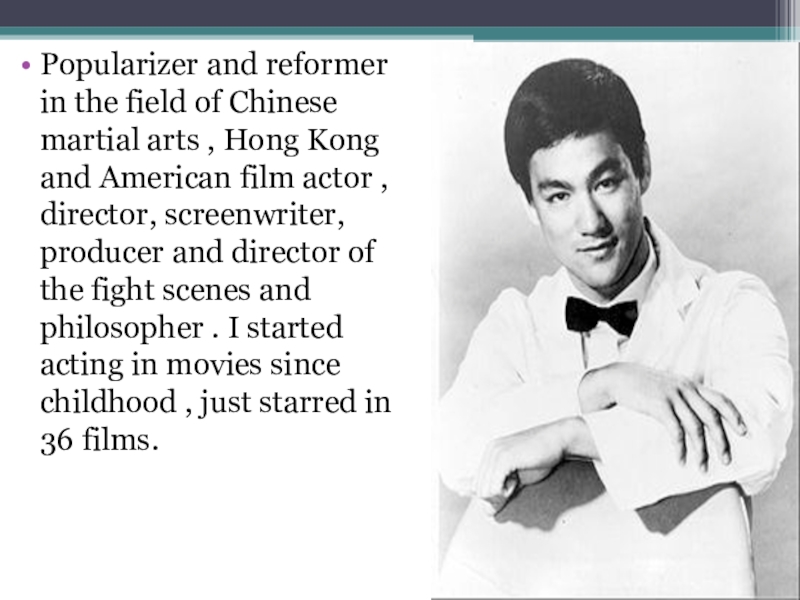 Popularizer and reformer in the field of Chinese martial arts , Hong Kong and American film actor , director, screenwriter, producer and director of the fight scenes and philosopher . I started acting in movies since childhood , just starred in 36 films. 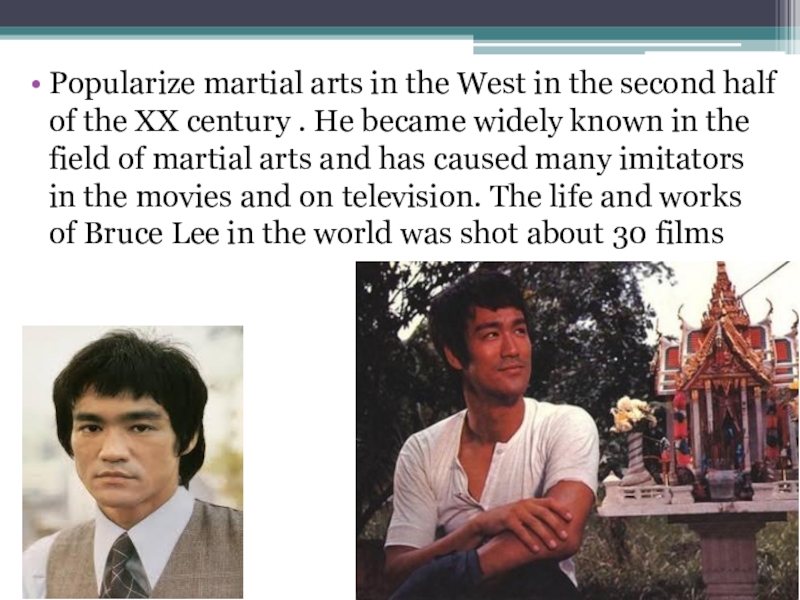 Popularize martial arts in the West in the second half of the XX century . He became widely known in the field of martial arts and has caused many imitators in the movies and on television. The life and works of Bruce Lee in the world was shot about 30 films 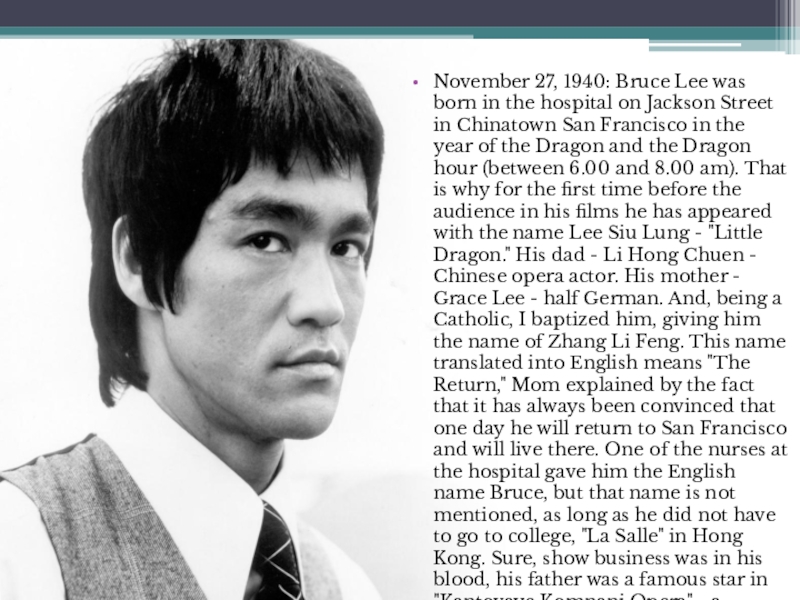 November 27, 1940: Bruce Lee was born in the hospital on Jackson Street in Chinatown San Francisco in the year of the Dragon and the Dragon hour (between 6.00 and 8.00 am). That is why for the first time before the audience in his films he has appeared with the name Lee Siu Lung - "Little Dragon." His dad - Li Hong Chuen - Chinese opera actor. His mother - Grace Lee - half German. And, being a Catholic, I baptized him, giving him the name of Zhang Li Feng. This name translated into English means "The Return," Mom explained by the fact that it has always been convinced that one day he will return to San Francisco and will live there. One of the nurses at the hospital gave him the English name Bruce, but that name is not mentioned, as long as he did not have to go to college, "La Salle" in Hong Kong. Sure, show business was in his blood, his father was a famous star in "Kantovaye Komnani Opera" - a company specializing in the Chinese version of the music hall and variety shows. In fact, the only reason that Bruce was born in the United States, was the fact that his father committed at this time a tour of America. 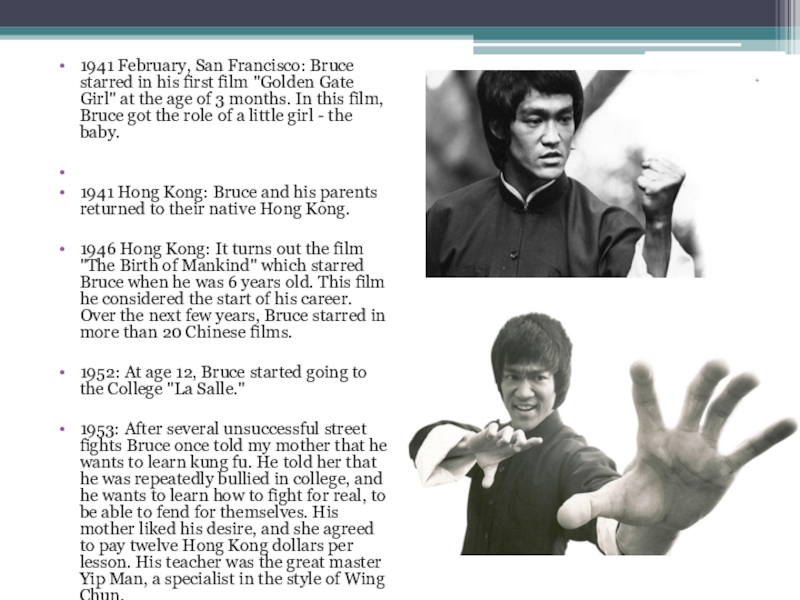 1941 February, San Francisco: Bruce starred in his first film "Golden Gate Girl" at the age of 3 months. In this film, Bruce got the role of a little girl - the baby.


1941 Hong Kong: Bruce and his parents returned to their native Hong Kong.

1946 Hong Kong: It turns out the film "The Birth of Mankind" which starred Bruce when he was 6 years old. This film he considered the start of his career. Over the next few years, Bruce starred in more than 20 Chinese films.

1953: After several unsuccessful street fights Bruce once told my mother that he wants to learn kung fu. He told her that he was repeatedly bullied in college, and he wants to learn how to fight for real, to be able to fend for themselves. His mother liked his desire, and she agreed to pay twelve Hong Kong dollars per lesson. His teacher was the great master Yip Man, a specialist in the style of Wing Chun. 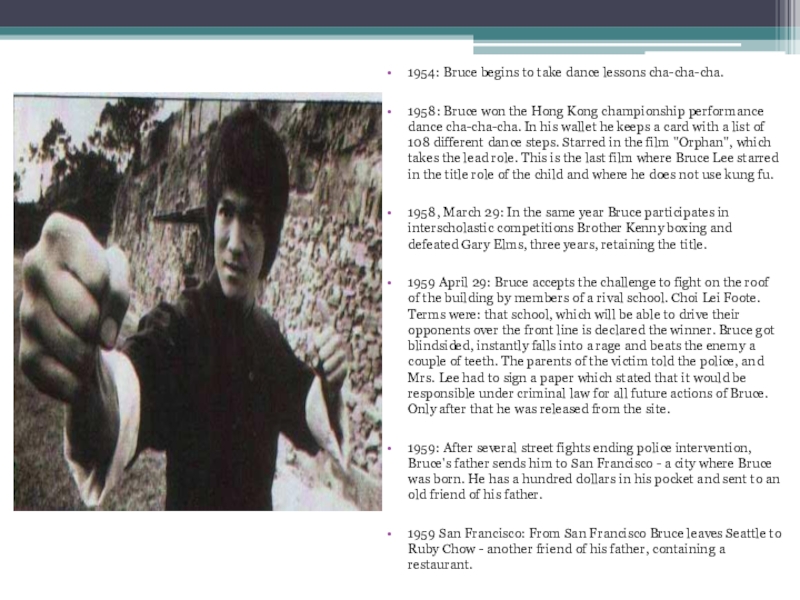 1958: Bruce won the Hong Kong championship performance dance cha-cha-cha. In his wallet he keeps a card with a list of 108 different dance steps. Starred in the film "Orphan", which takes the lead role. This is the last film where Bruce Lee starred in the title role of the child and where he does not use kung fu.

1959 April 29: Bruce accepts the challenge to fight on the roof of the building by members of a rival school. Choi Lei Foote. Terms were: that school, which will be able to drive their opponents over the front line is declared the winner. Bruce got blindsided, instantly falls into a rage and beats the enemy a couple of teeth. The parents of the victim told the police, and Mrs. Lee had to sign a paper which stated that it would be responsible under criminal law for all future actions of Bruce. Only after that he was released from the site.

1959: After several street fights ending police intervention, Bruce's father sends him to San Francisco - a city where Bruce was born. He has a hundred dollars in his pocket and sent to an old friend of his father.

1959 San Francisco: From San Francisco Bruce leaves Seattle to Ruby Chow - another friend of his father, containing a restaurant. 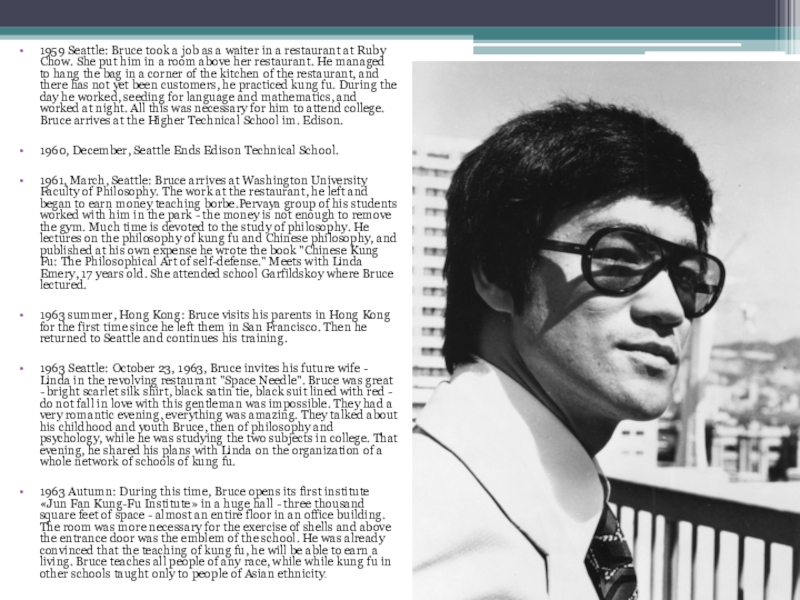 1959 Seattle: Bruce took a job as a waiter in a restaurant at Ruby Chow. She put him in a room above her restaurant. He managed to hang the bag in a corner of the kitchen of the restaurant, and there has not yet been customers, he practiced kung fu. During the day he worked, seeding for language and mathematics, and worked at night. All this was necessary for him to attend college. Bruce arrives at the Higher Technical School im. Edison.

1961, March, Seattle: Bruce arrives at Washington University Faculty of Philosophy. The work at the restaurant, he left and began to earn money teaching borbe.Pervaya group of his students worked with him in the park - the money is not enough to remove the gym. Much time is devoted to the study of philosophy. He lectures on the philosophy of kung fu and Chinese philosophy, and published at his own expense he wrote the book "Chinese Kung Fu: The Philosophical Art of self-defense." Meets with Linda Emery, 17 years old. She attended school Garfildskoy where Bruce lectured.

1963 summer, Hong Kong: Bruce visits his parents in Hong Kong for the first time since he left them in San Francisco. Then he returned to Seattle and continues his training.

1963 Seattle: October 23, 1963, Bruce invites his future wife - Linda in the revolving restaurant "Space Needle". Bruce was great - bright scarlet silk shirt, black satin tie, black suit lined with red - do not fall in love with this gentleman was impossible. They had a very romantic evening, everything was amazing. They talked about his childhood and youth Bruce, then of philosophy and psychology, while he was studying the two subjects in college. That evening, he shared his plans with Linda on the organization of a whole network of schools of kung fu.

1963 Autumn: During this time, Bruce opens its first institute «Jun Fan Kung-Fu Institute» in a huge hall - three thousand square feet of space - almost an entire floor in an office building. The room was more necessary for the exercise of shells and above the entrance door was the emblem of the school. He was already convinced that the teaching of kung fu, he will be able to earn a living. Bruce teaches all people of any race, while while kung fu in other schools taught only to people of Asian ethnicity. 1964: Bruce meets with John Rea at the international championship in karate. John Rea, - one of the leading instructors of the Korean karate - it becomes a good friend of Bruce.

1964 June: Bruce leaves Seattle and travels to Oakland (CA), which agrees with James Lee to open a second «Jun Fan Kung-Fu Institute». Bruce was so captured by the prospects of development of kung fu in America, he decided to opt out of receiving further education.

1964 summer, Auckland: Plans to open a second institute implemented, and Bruce takes a job as an instructor and assistant to his friend Taki Kimura, which he had prepared.

1964 August 17: Bruce returned to Seattle where marries Linda and - back to Auckland.

1964 Oakland: Soon after the opening of the school of kung fu, Bruce came to the hall kung fu master Wong Jack Man with an ultimatum. Bruce offers the following condition: if he loses in a fight, then either he closes his institute, or ceases to teach Americans. Bruce won the fight, but he was dissatisfied with the fact that the fight lasted too long. A fight with Wong Jack Maine miraculously changed his understanding and presentation of his kung fu. Before this fight he deeply believed in the possibility of improvisation and improvement within the Wing Chun style, but then he realized that although he won the match relatively easily, but his actions were neither lively nor efficiency. The fight, he realized, must end in a few seconds, during which he will cause their first strikes, not last, to last, as it was with Wong, three minutes. 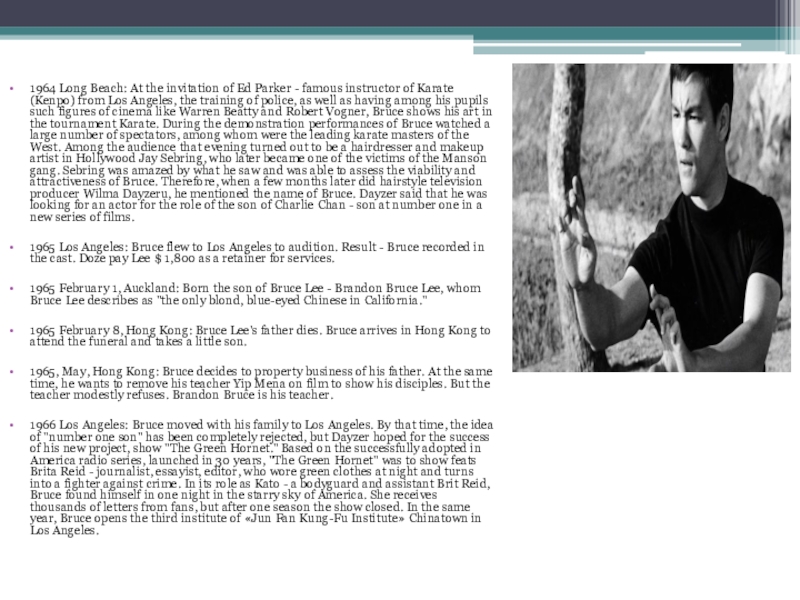 1964 Long Beach: At the invitation of Ed Parker - famous instructor of Karate (Kenpo) from Los Angeles, the training of police, as well as having among his pupils such figures of cinema like Warren Beatty and Robert Vogner, Bruce shows his art in the tournament Karate. During the demonstration performances of Bruce watched a large number of spectators, among whom were the leading karate masters of the West. Among the audience that evening turned out to be a hairdresser and makeup artist in Hollywood Jay Sebring, who later became one of the victims of the Manson gang. Sebring was amazed by what he saw and was able to assess the viability and attractiveness of Bruce. Therefore, when a few months later did hairstyle television producer Wilma Dayzeru, he mentioned the name of Bruce. Dayzer said that he was looking for an actor for the role of the son of Charlie Chan - son at number one in a new series of films.

1965 Los Angeles: Bruce flew to Los Angeles to audition. Result - Bruce recorded in the cast. Doze pay Lee $ 1,800 as a retainer for services.

1965 February 1, Auckland: Born the son of Bruce Lee - Brandon Bruce Lee, whom Bruce Lee describes as "the only blond, blue-eyed Chinese in California."

1965, May, Hong Kong: Bruce decides to property business of his father. At the same time, he wants to remove his teacher Yip Mena on film to show his disciples. But the teacher modestly refuses. Brandon Bruce is his teacher.

1966 Los Angeles: Bruce moved with his family to Los Angeles. By that time, the idea of ​​"number one son" has been completely rejected, but Dayzer hoped for the success of his new project, show "The Green Hornet." Based on the successfully adopted in America radio series, launched in 30 years, "The Green Hornet" was to show feats Brita Reid - journalist, essayist, editor, who wore green clothes at night and turns into a fighter against crime. In its role as Kato - a bodyguard and assistant Brit Reid, Bruce found himself in one night in the starry sky of America. She receives thousands of letters from fans, but after one season the show closed. In the same year, Bruce opens the third institute of «Jun Fan Kung-Fu Institute» Chinatown in Los Angeles. 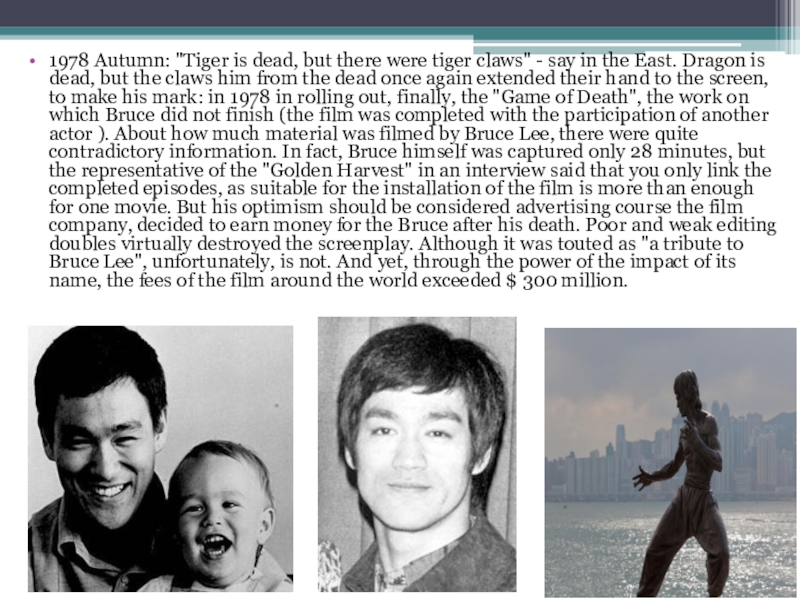 1978 Autumn: "Tiger is dead, but there were tiger claws" - say in the East. Dragon is dead, but the claws him from the dead once again extended their hand to the screen, to make his mark: in 1978 in rolling out, finally, the "Game of Death", the work on which Bruce did not finish (the film was completed with the participation of another actor ). About how much material was filmed by Bruce Lee, there were quite contradictory information. In fact, Bruce himself was captured only 28 minutes, but the representative of the "Golden Harvest" in an interview said that you only link the completed episodes, as suitable for the installation of the film is more than enough for one movie. But his optimism should be considered advertising course the film company, decided to earn money for the Bruce after his death. Poor and weak editing doubles virtually destroyed the screenplay. Although it was touted as "a tribute to Bruce Lee", unfortunately, is not. And yet, through the power of the impact of its name, the fees of the film around the world exceeded $ 300 million. 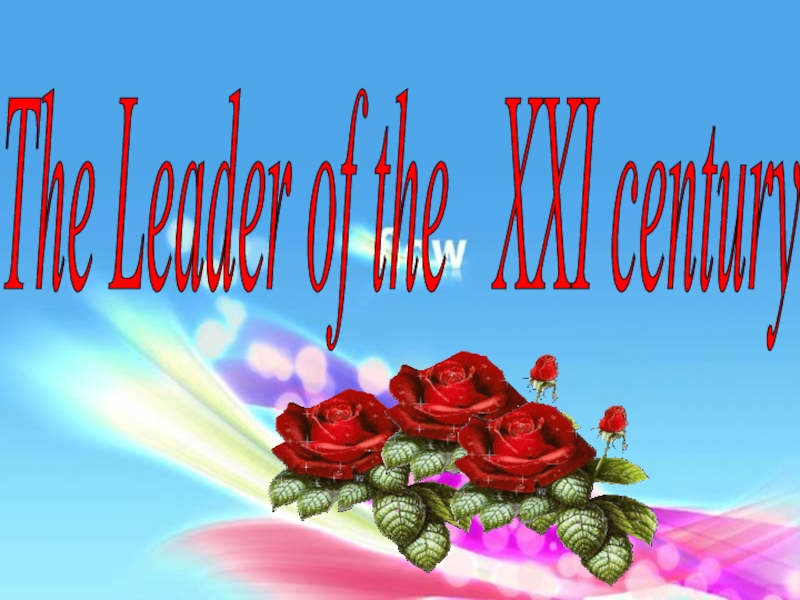 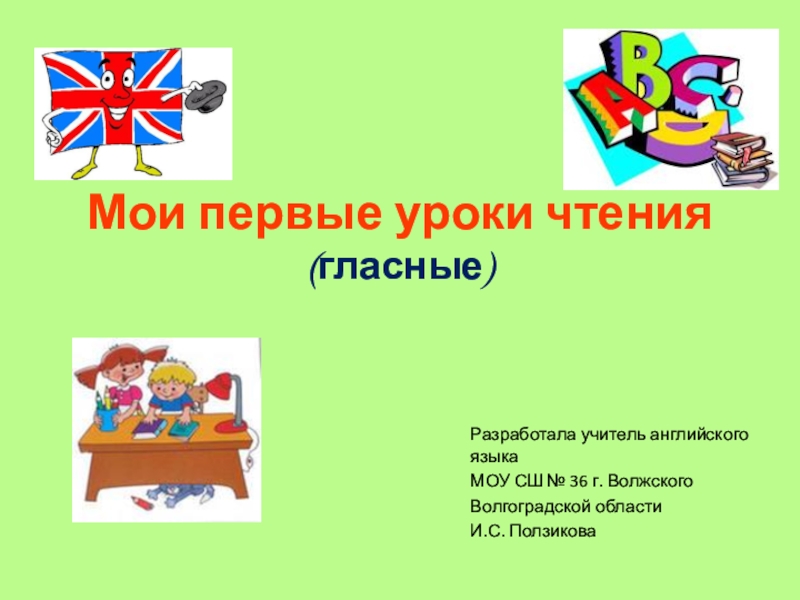 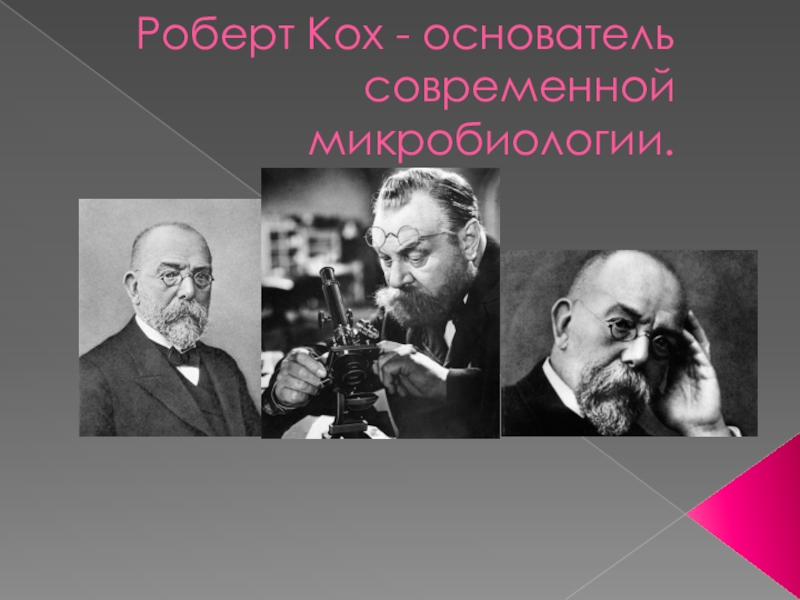 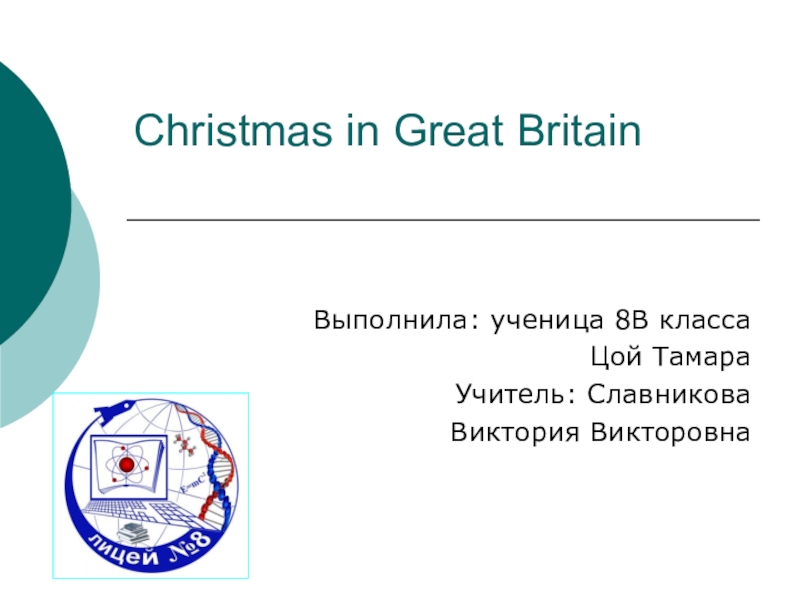 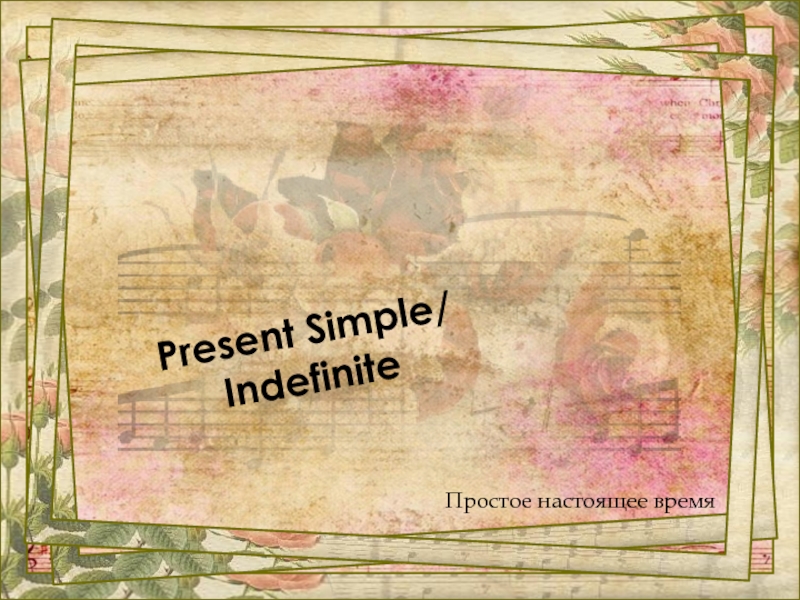 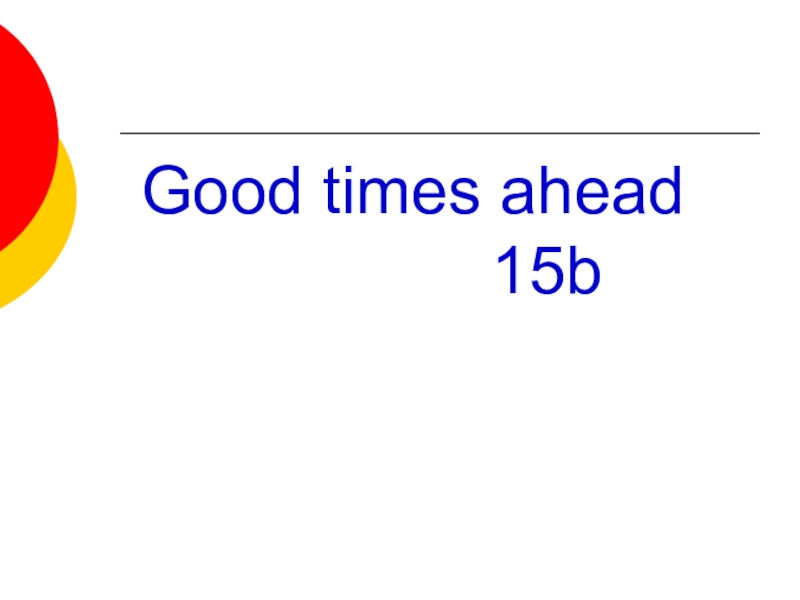